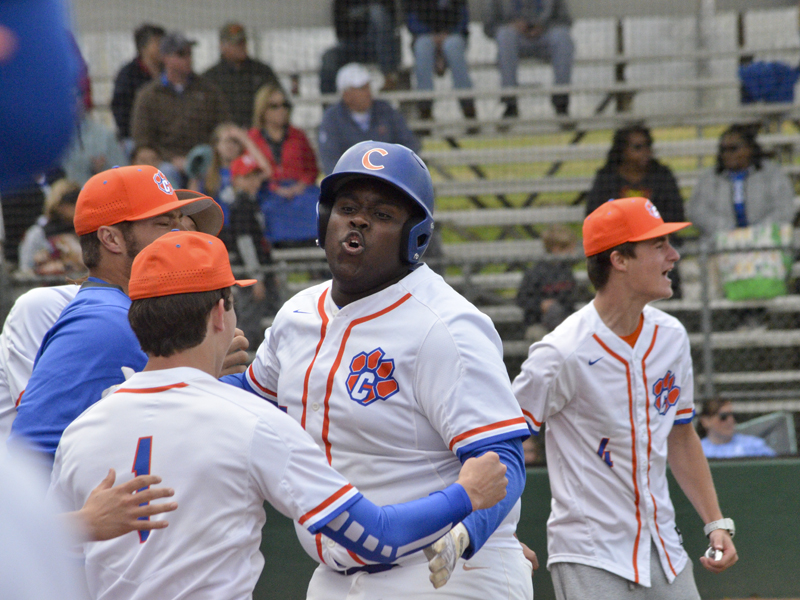 Deuntae Childers celebrates with teammates as he heads back to the dugout. He hit two doubles in Game 1. (Photo by Anthony Richards)

Chilton County High School pitchers turned in two lights-out performances during a sweep of Demopolis in the first round of the Class 5A playoffs on April 20.

Pico Kohn pitched into the seventh inning of Game 1 and struck out 11 batters in the process.

Cameron Baker followed it up with a complete game shutout in Game 2.

Demopolis grabbed an early 1-0 lead in the second inning of Game 1. However, that turned out to be the only run the Tigers would manage in the series.

CCHS got on the board in the third inning of Game 1 with back-to-back doubles by Deuntae Childers and James Cullum. The timely hits came with two outs and gave CCHS a 3-1 lead.

Childers worked his magic yet again with another double to the right field fence to lead off the fifth inning. 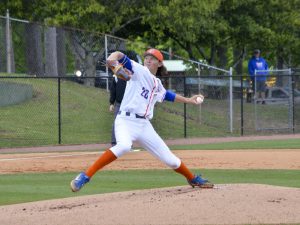 Pico Kohn delivers a pitch for CCHS in Game 1 of the first round series against Demopolis on April 20. He finished with 11 strikeouts. (Photo by Anthony Richards)

Once again CCHS’ offense did its damage with two outs on the scoreboard.

Kohn singled to load the bases, and CCHS pounced on mistakes by Demopolis with runs coming home after James Patterson walked, Ashley Price was hit by a pitch and Adam Jacks scored from third on a wild pitch.

Preston Smith capped the inning’s scoring by legging out an infield single for an RBI that increased the lead 7-1 through five.

Jaylon Gilley entered the game in the seventh inning and got the final out.

Runs were hard to come by for both teams in Game 2, but the offense eventually provided Baker with one run, which was all he needed to close out the series in commanding fashion on the mound.

Next up for CCHS is a second round matchup against Beauregard. The Tigers will host the series with Game 1 scheduled for April 26 at 5:30 p.m.