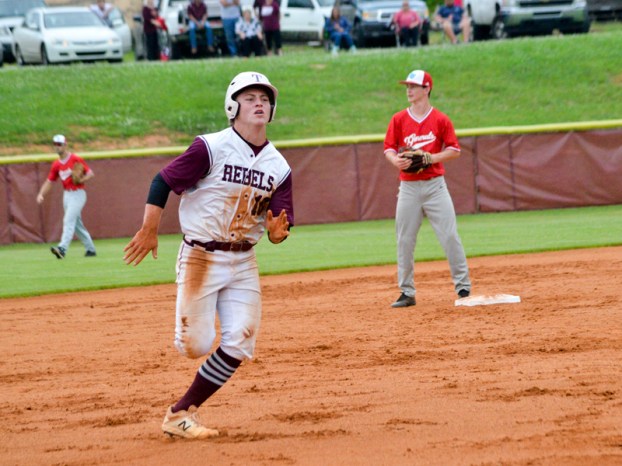 Chase Birchfield of Thorsby rounds second base and digs for third against Horseshoe Bend in the first round of the Class 2A playoffs on April 18. (Photo by Anthony Richards)

THS baseball looks the part in Round 1

Thorsby baseball handled its business with a pair of shutout victories against Horseshoe Bend in the first round of the Class 2A playoffs.

The Rebels won Game 1 10-0 in five innings behind a stellar performance by Tanner Jones on the mound and at the plate.

Jones sent a pitch over the left field fence for a two-run home run that helped give Thorsby an early 5-0 lead after the first inning.

He then went on to takeover the game on the mound and throw a no-hitter, which included seven strikeouts and no walks.

Tyler Jackson went 3-for-4 with an RBI, while Chandler Stephens was a perfect 2-for-2 at the plate with a pair of RBIs.

Game 2 continued the script, as the Rebels cruised to a 6-0 win behind a four-run third inning that was highlighted by another two-run bomb by Tanner Jones.

Horseshoe Bend once again struggled to hit the ball, but this time against Trent Jones who got the start in Game 2 for Thorsby.

Trent Jones pitched five innings of one-hit ball before the game was called due to weather. He struck out six Horseshoe Bend batters.

Jacob Lockhart had a successful series from the leadoff spot. He went 3-for-5 and accounted for four runs during the two games.

Lockhart was an extra base machine with a triple and a pair of doubles against Horseshoe Bend pitchers.

The Rebels were aggressive on the base paths and finished with nine stolen bases in the series, including four by Jackson in Game 1 alone.

Thorsby will play on the road in the second round against either Cottage Hill Christian of Mobile or Washington County. The series would start April 26 at 5 p.m.