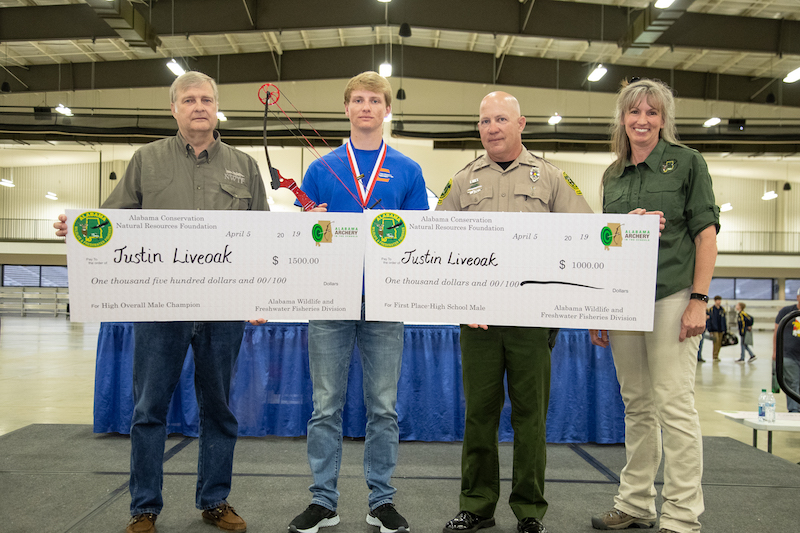 Justin Liveoak, second from right, accepts scholarships for placing first at the Alabama Archery in the Schools competition. (Courtesy of Billy Pope)

Justin Liveoak of Chilton County High School won the Alabama Archery in the Schools male division tournament and is headed to the national competition in May.

Liveoak is no stranger to the state level of competition having competed at that level the past two years. However, this is the first year he came away with a win.

“Since I have been in high school, I have placed second (at state) two years,” Liveoak said. “It’s kind of like a weight lifted off my shoulders, because I know that I have won state its opened up a new door.”

Liveoak said this year during the final round of competition he stayed more focused and relaxed than previous years.

“I was not near as focused last year as I was this year,” Liveoak said.

He said previously in the last round he would lose focus in the final round starting to think about that he was about to win.

The win comes with two scholarships totaling $2,500 which can be used at the college of his choice.

Both scholarships were presented by the Alabama Conservation Natural Resources Foundation. One was for being the High Overall Male Champion. The other was for first place in the High School Male division.

While Liveoak, a high school junior, has begun touring colleges, he has not made a decision about where he would like to attend. He said he is considering doing archery at the college level.

He also received a couple of archery bows and a target as a part of his prize.

Liveoak will compete at nationals on May 11.

Liveoak has been on an archery team since he was in sixth grade.

“Now that I am older, I love teaching the younger kids how to shoot and watching them kind of excel at it,” Liveoak said.

He said older students had helped him his first year when he was really nervous.