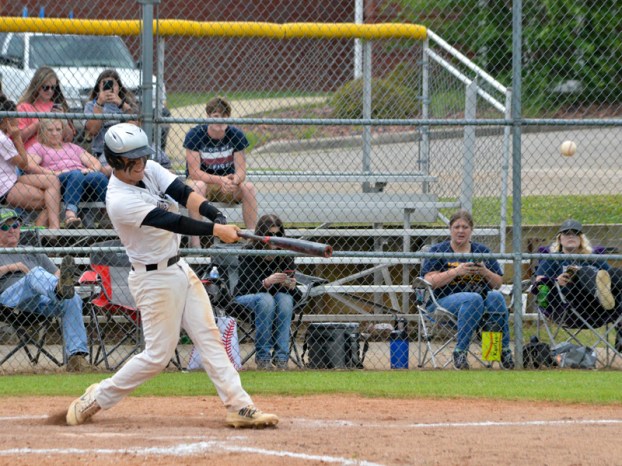 Billingsley’s Walker Motley hits a RBI triple against Isabella in the first round of the state playoffs on April 18. (Photo by Anthony Richards)

Billingsley baseball set the tone early en route to a first round sweep of Isabella, 8-1 and 6-3, on April 18.

After Isabella struck first with a run in Game 1, the Bears quickly responded with a run of their own to tie the game in the bottom half of the second inning.

It was all Billingsley from then on, as DeRonta Bates drove in two runs with a double to center field in the third inning and later came home to score on a wild pitch.

Richard Smith also had a RBI groundout to give the Bears a 6-1 lead after three innings of play.

Billingsley senior Walker Motley was hitting the spots that catcher Jonathan Shields was setting up for him, which led to a complete game and a near flawless outing on the mound in Game 1.

Jacob Day, one of only three Isabella seniors, started Game 1 for the Mustangs. He was able to bounce back and settle down after getting roughed up in the third inning.

Motley also made some noise with his bat with a two-run triple in the fourth inning.

Isabella fought back in Game 2, but the Bears proved to be too much once again in the end.

With the wins, six Billingsley seniors will have the opportunity to extend their high school careers for one more week.

The Bears will host Brantley or Ellwood Christian in the second round of the Class 1A playoffs beginning April 26 at 5 p.m.