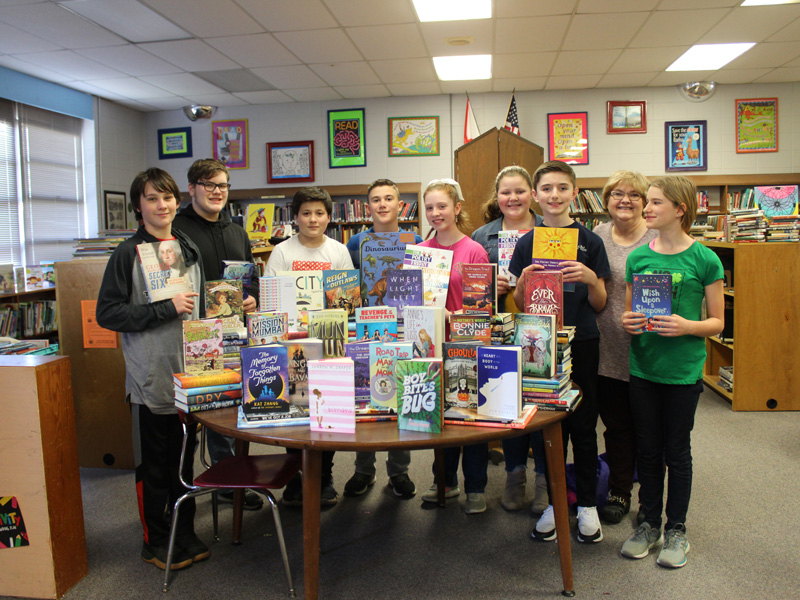 Thorsby students stand around a pile of books that the school’s library received with a grant from the University of Alabama. (Contributed photo)

The library at Thorsby School received an influx of books after being awarded a grant from the University of Alabama’s School of Library and Information Services.

Through the grant, the library received roughly 200 books worth $2,600.

“It’s a pretty good amount, and most of them were for middle school and high school, which was something we needed,” Thorsby librarian Vanessa Langston said. “It’s a range of fiction, nonfiction and a little bit of everything.”

According to Langston, having a variety of books spread across the age groups is even more important for a K-12 school such as Thorsby.

There was a span in recent years that the high school students at Thorsby began to shift their focus away from the library, but Langston has begun to see a change in the mindset.

“Our high schoolers are beginning to use the library again,” Langston said. “It is great to see.”

Langston is in her fourth year as the school’s librarian, and adding books to the collection on hand is always something in the back of her mind.

“Anyway we can get new books, because they do get worn out and torn up,” Langston said. “This is a great way to replace them, because the funds are not there to replace everything that we need. It always makes you proud when you can get anything for your school.”

The grant factored in a lot of economics and targeted schools in areas with a lower financial level outside of the black belt.

“The students have been very excited, and they already want to know when I’ll have them ready to check out,” Langston said.

She is currently in the process of putting each book into the system and putting protective covers on them before they can be placed on the shelves and available to be checked out.

According to Langston, getting grants is difficult, but in this case it was more straightforward than most procedures she has encountered.

She was notified of Thorsby’s selection just three weeks after applying.

“I just put in the application, and wow,” Langston said. “It was very quick.”

The only caveat of the grant was that Langston had to make a trip to Tuscaloosa to pick up the books from the university.

However, it was a trip she was more than happy to make.

“It was nice to get to go over there and see their [University of Alabama] library,” Langston said.