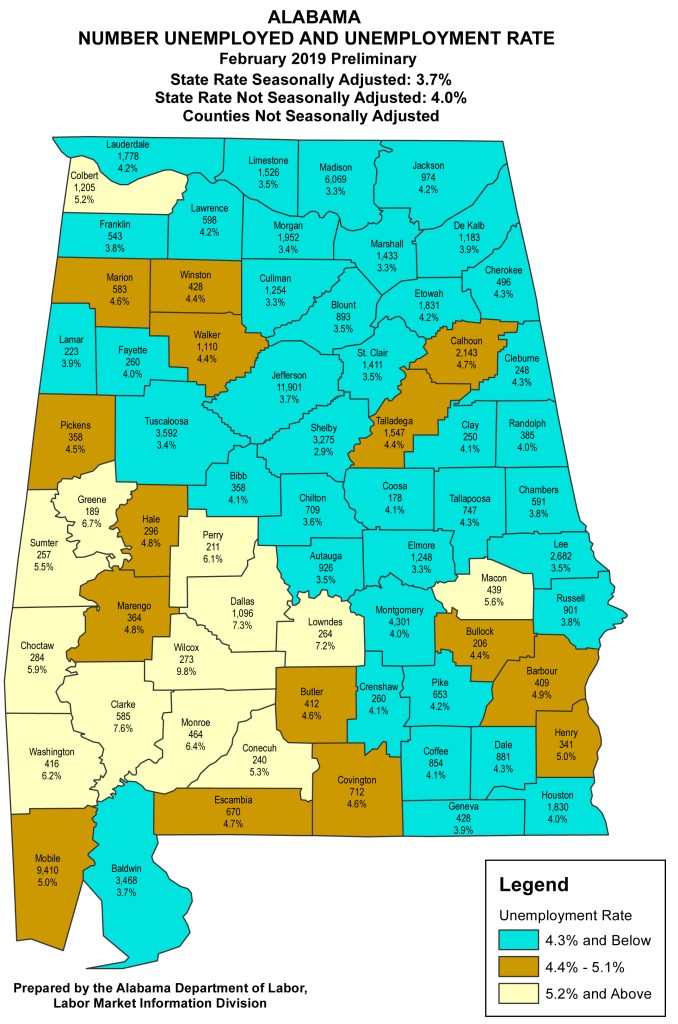 This map shows the February unemployment rate for each county in Alabama. (ALABAMA DEPARTMENT OF LABOR)

Alabama reached a milestone during the month of February by seeing the lowest-ever average unemployment rate statewide.

The announcement was made along with the release of the February numbers by the Alabama Department of Labor.

“Our unemployment rate, which is clocking in at a new record low of 3.7 percent, is proof that Alabama is open for business,” said Alabama Department of Labor Secretary Fitzgerald Washington. “We’ve shattered employment records for nine months in a row now. People are continuing to join the labor force, with the expectation that they will get a job – and they’re getting jobs.”

The seasonally adjusted 3.7 percent rate is down from 3.8 percent in January and below the 4.0 percent posted this time last year.

Here in Chilton County, the unemployment rate for February was 3.6 percent, which is down from the 4.0 percent posted in January.

According to the labor department, 18,984 people were employed in the county, while only 709 remained unemployed. That is down from 771 people listed as unemployed in January.

The February unemployment rate for the county was at 4.1 percent a year ago.

February’s rate represents 2,127,626 employed persons, compared to 2,123,650 last month and 2,100,195 in February 2018, representing yearly growth of 27,431, according to the labor department. All told, 82,304 were counted as unemployed, the second lowest number ever recorded, compared to 83,398 in January and 87,534 in February 2018.
“More than 27,000 Alabamians are working now than a year ago, and they’re bringing home more money in their paychecks, which is great news for our economy,” Washington said.
Northern neighbor Shelby County continues to have the lowest unemployment rate of any county in Alabama.

Shelby posted a rate of 2.9 percent in February. The highest unemployment rate was once again Wilcox County at 9.8 percent.

“Sixty-six of 67 counties experienced drops in their unemployment rate this month, and 64 of 67 counties saw equal or lower rates than in February 2018,” according to the labor department.