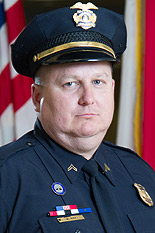 Clanton Police Department now has another member working to help keep local children safe when it comes to the internet.

Det. Whitney Ray has joined the Alabama Internet Crimes Against Children (ICAC) Task Force. Ray has been with Clanton police since 2004.

“The ICAC Task Force is a national task force that is comprised of over 4,500 law enforcement officers from all over the country,” according to CPD Capt. David Clackley. “The purpose of the task force is to establish a working group of officers with emphasis on combating child exploitation or abuse through use of internet tools. The task force works to catch child predators and rescue children from a variety of abuse scenarios. The Alabama ICAC Task Force is coordinated by ALEA and is made up of officers from all parts of the state.”

Ray completed his computer forensic examiner certification from the National Computer Forensic Institute (NCFI) in Hoover over a year ago. NCFI is operated by the Secret Service. He completed the ICAC certification this week.

“Upon completing this (ICAC) certification, (Ray) was issued several thousand dollars worth of equipment to use to perform his digital forensics with,” Clackley said. “The equipment was obtained at no cost to the city, and the six-week training course was free as well.”

Ray is only the second member of law enforcement in Chilton County to receive this certification and membership in the ICAC Task Force.

“CPD now has two forensic examiners and ICAC Task Force members,” Clackley said. “Using our combined training and equipment, we have the capability of analyzing any digital evidence in house without the months-long wait at other labs as well as machines used to monitor online activity to locate suspects in child pornography and other exploitation online.”