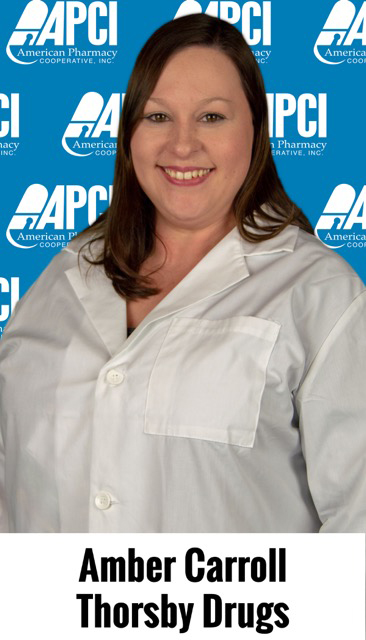 According to a release from APCI, Hayes and Carroll were among more than 200 pharmacists from 15 states at the conference, which was the 34th annual event.

“Independent locally-owned pharmacies are vital to our communities, and we are proud that patient-focused pharmacy staffs like Christa Hayes and Amber Carroll are part of APCI,” said Tim Hamrick, CEO of the cooperative.

“We are convinced that local pharmacists serve patients best, like no big-box chain can. APCI offers the necessary training, tools, products and supportive services to equip community-based pharmacists to take the best possible care of those who depend on them.”

Christa Hayes and her husband Jeremy opened Thorsby Drugs in 2012. According to the release, it was the first time in 10 years the town was served by a pharmacy.

Hayes earned her degree from Samford University’s McWhorter’s School of Pharmacy and had previously worked for Wood Drug Company in Thorsby.

Carroll is the pharmacy’s business manager.

“Our roots run deep here, so we are invested in the lives of our patients,” Hayes said. “Making sure they get the quality care they deserve is important to us. Our patients know us and know that they can trust us. That’s something we will never take for granted.”

“Founded in 1984, APCI is the market leader in independent pharmacy associations and serves more than 1,600 members in 23 states,” according to the release. “The 2019 annual meeting, held at the Opryland Hotel in Nashville, offered continuing education courses for pharmacists and pharmacy technicians, as well as training on technology advancements, operations trends and pharmacy techniques.”