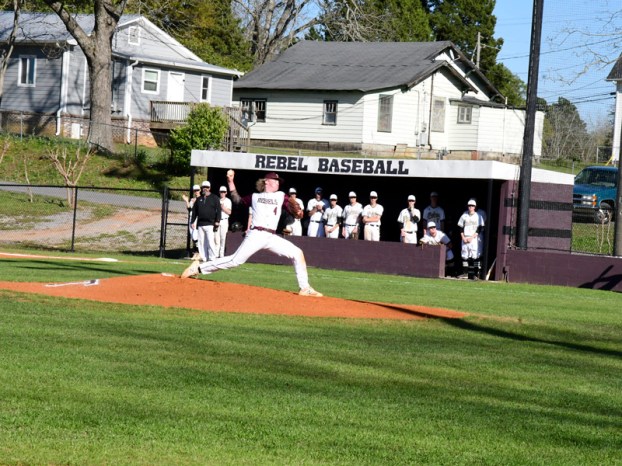 Tanner Jones of Thorsby throws a pitch in Game 1 against Fayetteville on April 2. (Photo by Anthony Richards)

With the victories, the Rebels improved to 20-3 and 7-0 in the all important area play.

As they have done all year, Thorsby overpowered Fayetteville in all three games, which included a pair of shutouts.

The Rebels exploded for six runs in the third inning to win Game 1 10-0 in five innings.

Cole Hight made the most of his trips to the plate with a perfect 3-for-3 performance that was highlighted by an RBI triple in the big third inning. He finished with three RBIs in the contest.

Tanner Jones allowed just two hits as he pitched into the fourth inning before being relieved by Jacob Lockhart who struck out three in just more than an inning of work.

Game 2 was much more of a pitcher’s duel than the prior game with Trent Jones leading the way for Thorsby with a complete game shutout. 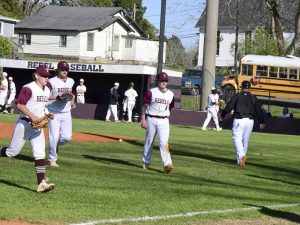 The Rebels improved to 7-0 in area play with a trio of victories over Fayetteville. (Photo by Anthony Richards)

He struck out nine batters while allowing just three hits sprinkled throughout the seven innings.

The Rebels scored five of their six runs in the third and fourth innings.

Tyler Jackson, Tanner Jones and Trent Jones each drove in a run, while Tucker Patterson doubled.

The tightest game of the series was Game 3, but that was not reflected in the 12-3 final score.

Thorsby led 5-3 heading into the seventh inning after Fayetteville had just scored two to cut the deficit in the bottom of the sixth.

However, the Rebels showed why they are in the top 10 of the Class 2A state rankings with seven runs in the final inning.

Chase Birchfield led off the seventh with an infield single and came home on an RBI triple by Patterson. Hight, Jackson and Birchfield each had RBIs as Thorsby’s lineup batted around in the inning.

Patterson pitched all seven innings and mowed down 14 Fayetteville batters in the process. He allowed just one earned run on five hits.

The Rebels outhit Fayetteville 30-10 in the series.

Thorsby baseball continued its torrid run production of late, as the Rebels outscored Verbena 27-8 during a pair of wins... read more