Fallen Union soldiers to be honored at Ebenezer Cemetery 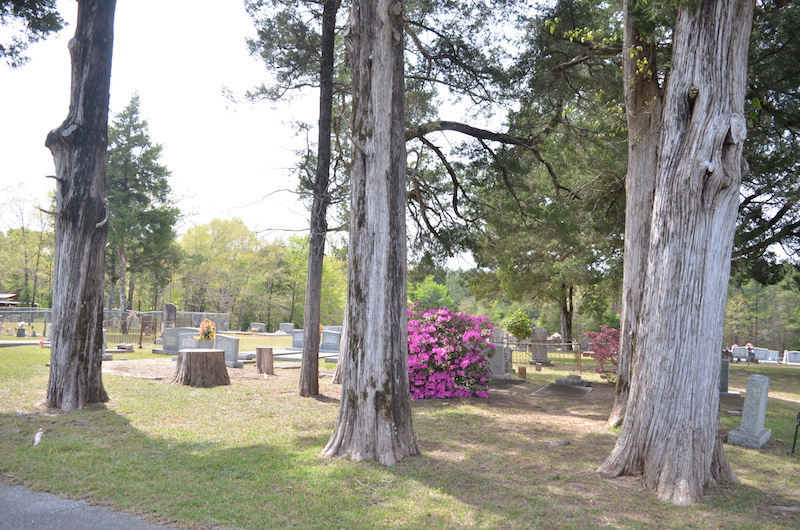 A plaque listing the names of all 12 Union soldiers who died during the Battle of Ebenezer Church will be placed near these trees, said to mark where eight of them were once buried. (JOYANNA LOVE/ ADVERTISER)

A commemorative plaque placement ceremony is scheduled for Ebenezer Cemetery on April 27.

The plaque will list the names of 12 Union soldiers who were once buried in the cemetery. The soldiers were remembered through a small monument placed in 1977, but the names were not included.

“I have always wanted the names of these men put up here,” Arnold said. “We are not enemies any more. They gave up their life for what they believed in.”

Arnold, who started work on the project, said the plaque will be erected amongst eight trees that mark where eight of the soldiers were buried.

Additional funding came from donations during a tour of the cemetery that Arnold hosted.

The Official Records of the War of the Rebellion, an extensive collection of records, was used to track down the names of the 12 soldiers.

Arnold said Jerry Olinger, who is really interested in genealogy, worked on finding the names of the soldiers and confirming them.

The battle in which the soldiers died was fought on that very hill on April 1, 1865, before the land had been turned into a cemetery.

Gen. James Wilson was leading Union troops through the area.

“Their goal was to capture Selma,” Arnold said. “Selma, at the time, had the last arsenal in the South everything else had been destroyed (and) captured.”

Forrest was injured by a saber in the fight but shot and killed the person who injured him. Another Union solider was killed by a Confederate soldier after his horse through him.

“The Southerners were grossly outnumbered …Everybody retreated toward Selma,” Arnold said. “There was 12 Union soldiers that were killed here … They don’t know how many Southern soldiers died, but according to Gen. Wilson, that’s the Union General, he didn’t think that very many more died than what he lost.”

Initially, the wounded soldiers had been taken to a nearby planation. Those who died were later brought back to the battle site and buried in one of the trenches as a mass grave. Union soldiers returned to the site to bury each soldier individually. Arnold said a cedar sapling was planted at the head of each grave to find the body later.

Headstones for four of the soldiers have been found in the state of their regiment: three in Ohio and one in Indiana.

“Sometime after that, their families came here and dug up the remains of their relatives and took them back home and reburied them,” Arnold said. “According to the Veterans Administration, the dead from Ebenezer Church and the dead from Selma, Alabama (battles) was moved to Oalwood Cemetery in Montgomery after the war.”

In 1867, when the national cemetery was established in Marietta, Georgia, the bodies were moved again.

In later years, the land became the property of Ebenezer Baptist Church for a cemetery.

The Battle of Ebenezer Church came at the very end on the Civil War. On April 2, 1865, Selma fell to Union troops, and Jefferson Davis left Richmond.

Arnold said Davis burned Confederate records as a part of the evacuation. This made it even more difficult to know what Southern soldiers may have been killed in which battle.