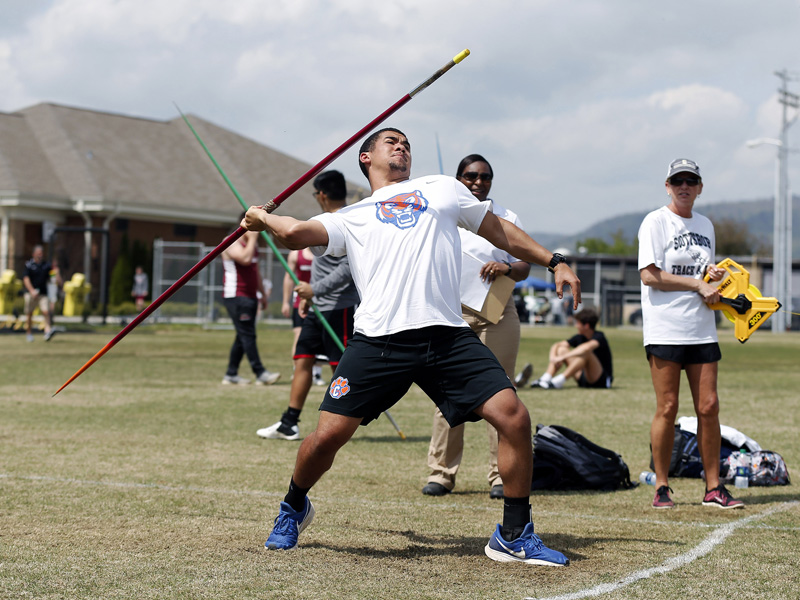 Cameron Wright of CCHS competes in the Javelin. (Photo by Brandon Sumrall/Special)

The Chilton County High School track and field team took in the April 6 sunrise from the confines of a pair of school buses, as the Tigers embarked on a three-hour journey to Scottsboro to compete in the Scottsboro High School Invitational.

With a pair of excellent meets already under their belts, the Tigers looked to step it up a notch as 26 teams from Alabama and Georgia looked to take home top honors in one of the largest events CCHS would compete in this season.

The higher level of competition saw the Tigers bring home a slightly fewer number of top 10 finishes than they had come accustomed to.

However, several CCHS athletes competed well against the other top track stars.

The Tigers varsity boys 4×100 meter relay teams brought home a sixth place finish out of the 11 teams that competed, while Koby Albert placed second out of 45 competitors in the varsity boys long jump with a leap of 21-10 1/4. 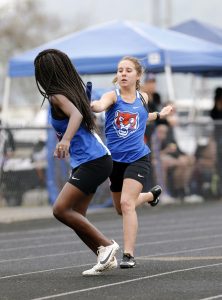 Lydia Patterson passes the baton to Destinee Ray during the 4×400 relay. (Photo by Brandon Sumrall/Special)

Albert also competed well in the triple jump with a fifth place finish on a leap of 42.2.

The varsity girls 4×100 meter relay team would bring home a third place finish out of the twelve competing teams with a run of 54.32.

A leap of 14-2 3/4 by Brown was enough for fifth in the varsity girls long jump while Kyra Holland continued her success with a fifth place finish in the discus.

The Tigers’ next competition is the Troy Invitational on April 11.