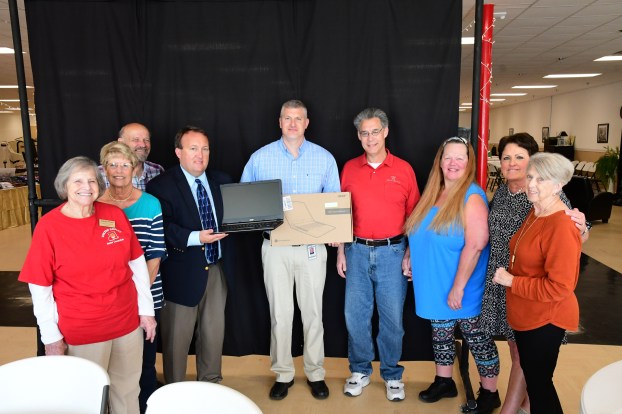 Chilton County Schools superintendent Jason Griffin holds up one of six Chromebooks presented to himself and Thorsby assistant principal Tim Fortner by the Rotary Club of Chilton County and Senior Connection on April 3. Four other Chromebooks were donated to Clanton Intermediate School as well. (J.R. TIDWELL/ADVERTISER)

The Rotary Club of Chilton County and Senior Connection in Clanton partnered to donate 10 Chromebooks to two different schools in Chilton County.

CCS superintendent Jason Griffin and Thorsby assistant principal Tim Fortner were presented with six of the Chromebooks during a lunch meeting of the Rotary Club and Senior Connection on April 3.

Third graders and potentially other students will use the six devices going to Thorsby School. Those six were purchased by the Rotary Club using funds raised at its annual Taste of Chilton County event.

“Technology is a very important part of what we do in schools,” Griffin said. “It is a tool we use for instruction. We are very appreciative to have these (Chromebooks) donated by the Rotary Club.”

“We really appreciate this,” Fortner said. “Technology is expensive, but it is also very useful. They will be put to good use at Thorsby.”

Senior Connection, which partners with Rotary Club for the Taste of Chilton County, used funds it raised from the event to purchase four Chromebooks for students at Clanton Intermediate School.

“Rotary Club did something similar last year, and it seemed like a good way to give back to the children,” said Senior Connection director Vanessa McKinney.

“(The Chromebooks) will give (Thorsby and CIS) an additional tool to provide instruction, so it will be very beneficial to that teacher and class that are using them,” Griffin said. “They will be used schoolwide. Everybody will have access to them.”

Rotary Club specifically chose the third grade at Thorsby because, according to chapter president Gordon Swenson, studies have shown it is the most “critical” grade for students.

“If kids are behind in third grade, they stay behind the rest of their lives,” he said. “With technology today, the kids are used to it and they can use it. It helps the teachers. If they don’t have something like that, it puts them behind as they move forward.”

Swenson said this donation was one of several ways Rotary Club has put money towards the benefit of youth in the county.

He said that Rotary has given to Verbena in the past and now Thorsby, along with partnering with Senior Connection who gave to CIS.

Therefore, he said the group will be looking to aid students at Isabella, Maplesville and Jemison in the future.

By J.R. TIDWELL / Editor Michael David Belcher, 34, was sentenced to death by lethal injection by a judge in... read more