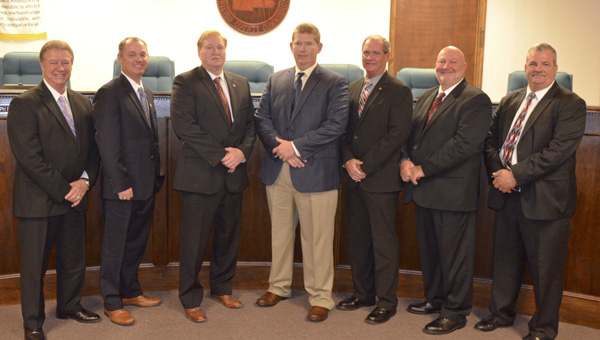 The Chilton County Commission led a discussion and answered questions from residents about the recent sales tax proposal. (File photo)

The Commission answered questions from residents in a free-flowing discussion concerning the recent sales tax proposal that was sent to the state legislation, the proposed farm center as well as roads and infrastructure.

The majority of residents that spoke did not appear to have a problem with the tax increase itself, but instead were just searching for more details surrounding the project and where the tax would be spent.

If the tax passes the approval of the legislation, it will mean a one-cent increase in sales tax countywide and two cents in the unincorporated areas of the county, those outside of municipality boundaries.

Commission chairman Joseph Parnell acknowledged that “I don’t know anybody who loves a tax,” but also stated that after much discussion, a sales tax was perceived to be a “fair” tax because everyone pays their part as opposed to property tax.

An interesting point raised was that the tax was going to happen regardless of whether the farm center was proposed.

The sales tax increase is expected to generate an estimated $4 million, which is a figure based off of what the one-cent hospital and schools tax have brought in.

According to Parnell, a projected 900,000 people are expected to visit the farm center throughout one year. That is equivalent to two seasons of Alabama Crimson Tide football home games.

The plan is to keep those visitors in the county by bringing in restaurants and hotels in close vicinity to the farm center complex.

“This should have been done 25 years ago,” Commissioner Steve Langston said. “That’s why we’re in the mess we’re in now.”

Parnell stated that he remembers 20 years ago when Shelby, Autauga and Chilton counties were similar in size. So much growth has taken place since then, that the cities of Alabaster (Shelby) and Prattville (Autauga) each have a higher population than Chilton County as a whole.

Alabama currently has the third lowest rate of any state and Chilton County ranks 2,689th of 3,143 counties in the U.S. when it comes to taxes.

“You live in one of the cheapest counties, and the one-cent sales tax will not take you out of this,” Parnell said.

Some residents in attendance were concerned why the proposed increase was not presented to the residents to vote on.

According to Parnell, the law does not require a sales tax change to be put to a vote of the people, as it does for property tax changes.

A public vote can be taken for a sales tax, but it would only act as a research poll and would still come back to the Commission to make the final decision.

Knowing this, it also turned into a financial decision because it would have cost the county $30,000 to hold a special election.

The sales tax increase will go toward economic development, public safety and roads. If passed, the life of the bill is 35 years with no further sales tax escalation expected.

ALFA will keep up with the maintenance of the facility as part of their lease of the property.

“The maintenance of the facility will not be paid by the citizens,” Parnell said.

There have been discussions of the possibility of a satellite facility to house police and fire on location at the fairgrounds.

“This operation is still in its infancy,” Langston said. “There’s a lot of moving parts right now.”

One of the advantages of not having the facility operated by the state is that it opens up the possibility of private sector businesses placing sponsorship on the buildings at the complex as additional revenue.

“They [Commission] are trying to see into the future,” Chilton County IDB director Whitney Barlow said.

According to Barlow, big corporations are driving through the county on the interstate on a daily basis.

“I really want them to do more than just buy peaches,” Barlow said.