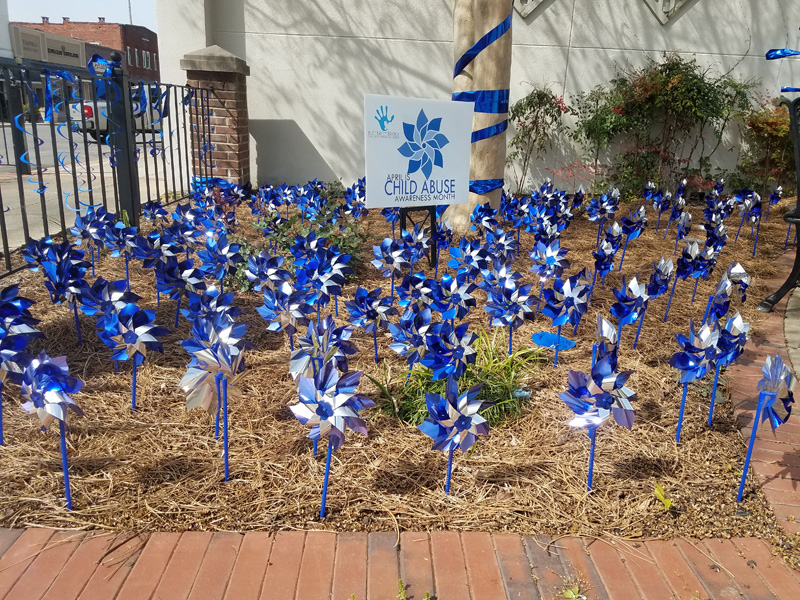 A pinwheel garden has been placed at Corner Park in downtown Clanton for child abuse prevention month. (Photo by Anthony Richards)

The organization is using a variety of platforms to help spread the word and prevent child abuse, including using the hashtag #breakthesilence on social media.

“We just hope that this month arms people with the information to help prevent or intervene before it becomes an abusive situation,” executive director Jana Zuelzke said. “That way, they are not having to come to Butterfly Bridge and be interviewed about something that has happened, but we are also there for all those kids who have been through something.”

Something new for this year is the pinwheel garden across from Butterfly Bridge’s location at Corner Park in downtown Clanton.

The garden consists of 133 pinwheels, which represents the children that were served by Butterfly Bridge in the previous year.

“Pinwheels are reflective of the innocence of childhood and how every child should have that,” events, development and outreach coordinator Brittani Ellison said.

Blue is the color associated with child abuse prevention and one of the ways the community can get involved is by wearing blue on Fridays during April.

Another new initiative this year is a partnership with the Chilton County Board of Education to encourage the students and staff at all public schools to wear blue on April 5.

Small pinwheel gardens will also be placed at each of the schools with different school clubs in charge of planting them.

According to Zuelzke, a few of the schools have done things in the past, but it is a great feeling to know that the awareness will now be spread countywide.

The first event will be Blue Ribbons and Biscuits hosted by Senior Connection from 8 a.m. to 9 a.m. on April 5.

It will be an opportunity for people in the community to mingle while eating biscuits with various jams and honey to try.

District Judge Chris Speaks and Probate Judge Jason Calhoun will be on hand for a proclamation signing ceremony.

Certain local restaurants and businesses have agreed to give a percentage of all their sales to Butterfly Bridge on specific days during the month. Check the Butterfly Bridge Facebook page to keep track of when and where the givebacks are going on.

Butterfly Bridge will also put weekly informational videos on Facebook. The videos will focus on providing tips to the community of what to look for when spotting the signs of possible child abuse.

“It’s about breaking the silence and getting it to the point where people feel comfortable talking about it,” Ellison said. “If it’s something that’s taboo that nobody wants to talk about, it makes it harder for it to be prevented.”

The video series was made possible through a grant with the Alabama Power Foundation.

“This month is about educating all ages and all people,” Zuelzke said. “Ninety percent of the time the children know their abuser. If parents and community members are in tune to that statistic, it will hopefully make them more diligent to protect their children from even people that they know and to know the signs of abuse.”

According to Ellison, a shocking statistic is that one in 10 children will be sexually abused before their 18th birthday.

The month of events ends with Blue Sunday on April 28, which is a national day of prayer for children that have been abused and those who work to help rescue them.

“The really wonderful thing that we see here at Butterfly Bridge almost every single day is that these kids can get their childhood back and they are resilient,” Zuelzke said. “With the proper help, they can go on to have great lives, and that’s what keeps us going.”