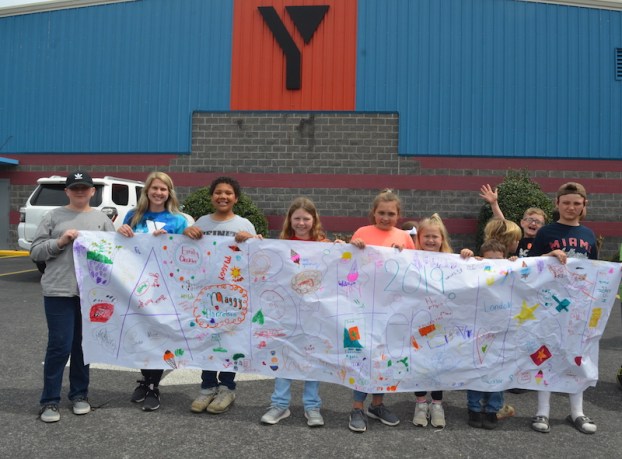 Spring break campers at the YMCA of Chilton County help kick off the 2019 A Better Us Campaign. (JOYANNA LOVE/ ADVERTISER)

The YMCA of Chilton County kicked off this year’s A Better Us Campaign with festivities on March 29.

Plans to raise funds in the coming month include a steak dinner and auction on April 12. The event will be at 6 p.m. at the Wyatt Barn, 6135 County Road 16 in Clanton. Tickets are $35 and can be purchased at the Y. The deadline to purchase tickets is April 10.

The YMCA is still collecting items for both the silent and live auction.

“All funds raised in the month of April go to our scholarships and summer camp,” Patterson said.

She said scholarships make it possible for children who would not be able to afford it to participate in sports programs, camps throughout the year when school is out and other YMCA programs.

Summer camp will include a number of learning opportunities and fun this year.

“We have a food science component this year where they are learning about food but also cooking and trying different foods,” Patterson said.

The camp will also include swimming, archery, sports, games and field trips. Patterson said field trips include visiting Lake Mitchell, Lanark in Millbrook and Oak Mountain as well as skating, bowling and going to the movies.

Former summer camper Maggy Harrleson said the funds would let them do more activities. Her favorite is swimming.

“They take us to the pool, and we get to swim for two or three hours,” Harrleson said.

Former summer camper Gracie Plier hoped people would give, so the campers could go on more field trips.

Her favorite field trip is to Lake Mitchell “because we got to inner tube and stuff like that.”

“It really is crazy we go out of the county to do different stuff, but just about all of them love the Lake Mitchell field trip the best,” Patterson said.

About 40 children receive scholarships to attend the summer camp each year.

An additional 50-60 scholarships are given for participation in other YMCA programs.

For tickets to the April 13 fundraiser or to make a contribution to the campaign, contact the YMCA of Chilton County at (205) 755-2382.