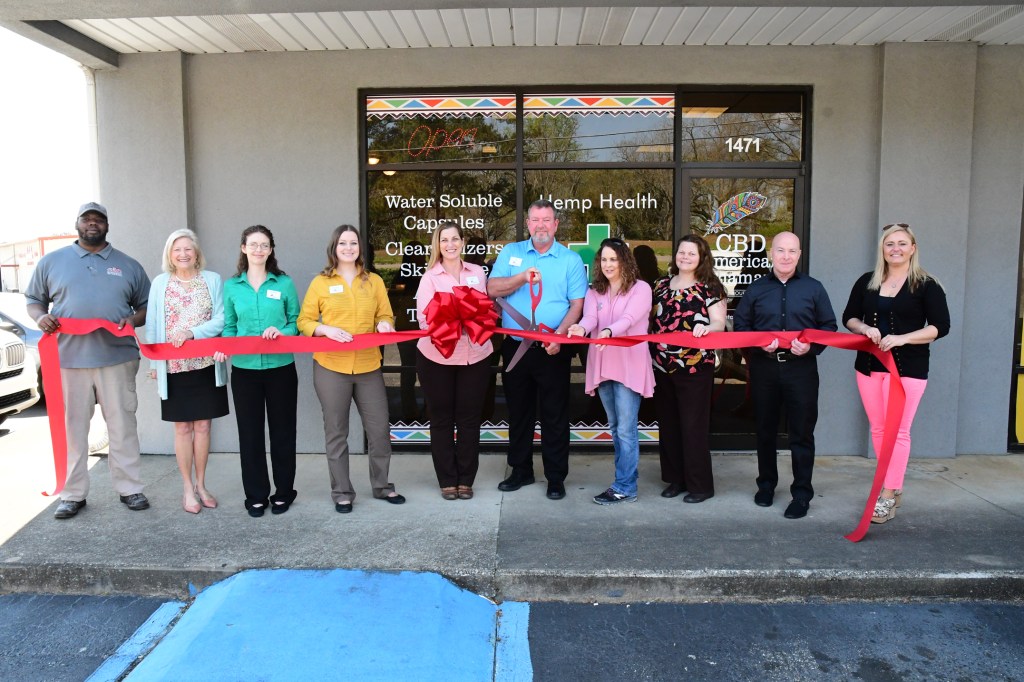 Co-owners Joe and Diane Moore cut the ribbon on their new CBD oil store in Clanton during a ceremony hosted by the Chilton County Chamber of Commerce on March 27. (J.R. TIDWELL/ADVERTISER)

A ribbon cutting hosted by the Chilton County Chamber of Commerce was held at the new CBD oil store in Clanton on March 27.

Joe and Diane Moore co-own the store, which sells products based around Cannabidiol, or CBD, oil. The store is a franchise of CBD American Shaman.

Joe Moore said he has heard many stories and testimonies from people who have seen different benefits from using CBD oil.

“The main thing we try to do is educate people on what this is,” he said. “Do what we did. Research. I challenge people to find something negative about what CBD does. There is a lot of not good stuff out there. The market is being flooded, even from overseas, that’s being tested, and it doesn’t even contain CBD in some of them. Our company wants the FDA to regulate us. We want them to control this market, because we stand behind our product. We were like most people a year ago. We didn’t know anything about this. It’s been fun. It’s (testimonies) that make us believe in it.”

Joe Moore said he and his wife, who are originally from Indiana but now call Clanton home, decided to open the store and sell the product because of benefits they have seen in their own personal lives.

“My mother introduced it to me,” he said. “My father, who is a retired police officer and military, was diagnosed with multiple sclerosis like 10 years ago. He is, for lack of a better term, a double amputee quadriplegic. He is in hospice, and he is in a semi-comatose state with all the medicine they have him on. He can’t do anything for himself.

“My mother got her hands on CBD oil before it was legal in Indiana. Three days after giving him treatment, she called my brother and I and said ‘standby.’ She put the phone on speaker phone, and my father goes ‘hey Joe, how are you doing?’ I hadn’t been able to have an intelligent conversation with my father in over a year. We were all blown away. He immediately reported his pain was way down. Not gone, but way down. He said the major thing for him was he was calm. He always described it as his ghost legs were flutter kicking. The VA doctors were able to take him off of OxyContin, which was keeping him in that state, so he was more lucid and in less pain.”

Joe Moore said the human body possesses what is called an endocannabinoid system that acts like an “internal health-monitoring system.” He said that using CBD oil benefits this system.

“By taking the CBD, it helps the body be an amazing thing,” he said.

CBD oil is derived from industrial hemp, which Moore said is a “cousin” of the marijuana plant.

However, the CBD oil is extracted from hemp strains that do not contain high levels of THC found in marijuana that some people take to get high.

Moore said CBD oil was legalized by the 2018 Farm Bill passed by Congress.

“Under the 2018 Farm Bill, the requirements are that (CBD oil) cannot have more than 0.3 percent THC,” he said. “All our products are batch tested to ensure they meet federal guidelines. You could take everything in this store, and you might end up with a headache, but you won’t end up high. There’s nothing that we carry that has any psychoactive effect to it.

The store is located at 1471 Seventh St. S in the same shopping center as Papa John’s.

It is open from 10 a.m. to 7 p.m. Monday through Saturday and is closed on Sunday.