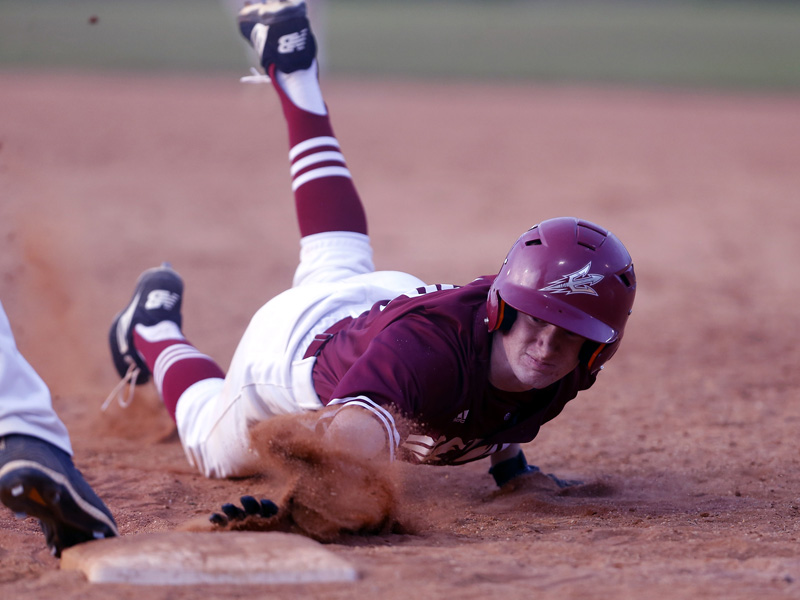 A Maplesville base runner dives back to a base to beat a pickoff throw against Billingsley on March 23. (Photo by Brandon Sumrall/Special)

The Maplesville varsity baseball team picked up a pair of hard-fought victories on March 23 at the expense of the Billingsley Bears.

The Red Devils won both games 8-5.

Game 1 of the series proved to be a pitcher’s duel, as Maplesville’s Jackson Abbott and Billingsley’s Tripp Glass retired the opposing team’s batters quietly through the first two innings.

It was the Red Devils that would put the first points of the day on the board thanks to an RBI single from Christin Brown that scored Abbott to give Maplesville and early 1-0 lead.

The slim lead would stand until the top half of the fifth, when Brown added one more for Maplesville thanks to a shot deep over the left field fence that made it a 2-0 Red Devil lead.

Not to be outdone, the Bears answered the Maplesville score with a few runs of their own.

A pair of singles by Glass and Walker Motley, along with a pair of Maplesville errors would see the Bears plate three runs in the inning while taking their first lead of the game, 3-2.

A scoreless top half of the sixth inning for the Red Devils saw Billingsley tag on two more runs during the home half of the inning.

A leadoff single by Eli Cobern was followed by another single from Jonathan Shields that set up an RBI double by Glass along with a Red Devils error that made it a 5-2 Billingsley lead after six innings of play. 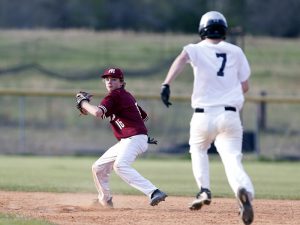 The top half of the seventh inning proved to be the undoing of the Bears, as Maplesville’s Brady Harrison got the inning started with a leadoff single.

Brown drew a walk, along with a single by Ashton Hobbs that loaded the bases with only one out.

A Red Devil strikeout knocked Maplesville down to their final out while still trailing by three with the bases loaded.

Three straight walks made it a five-all game, but Abbott followed it up with a bases-clearing double that would put Maplesville on top 8-5.

Abbott handled the pitching for Maplesville during Game 1 and threw 5 2/3 innings while allowing one earned run on six hits with 13 strikeouts.

He also led the Red Devils at the plate with a 2-for-4 performance that included a pair of doubles and three RBIs.

Glass also led the Bears at the plate with a 2-for-3 performance with a single, double and an RBI.

Game 2 of the series did not get off to the same slow offensive start as Game 1, as both teams kept the momentum going through the first inning.

A one-out single by Harrison got things going for the Red Devils while a pair of bases-loaded walks gave Maplesville an early 2-0 lead.

The Bears answered with a few runs of their own during the home half of the inning as a one-out single by Shields was followed by a double from Glass. 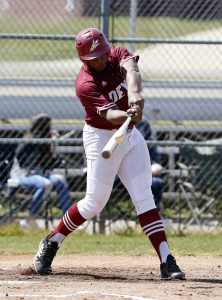 With Motley reaching on a Red Devil error along with a two-RBI single from Timothy Cook and a RBI single from Devin Blackmon, the Bears grabbed a 4-2 lead after one inning of play.

A scoreless second inning gave way to the third where Maplesville tacked on one more run thanks to an error by the Bears that allowed Gage Mims to cross home plate while cutting the Billingsley lead to one.

Hobbs would get the top of the fifth inning started for Maplesville with a leadoff single. With Mims reaching after being hit by a pitch, an RBI single from Jones would plate one runner, while an error from Billingsley would plate the other to give Maplesville a one run lead, 5-4.

Once again the Bears answered with a leadoff bunt from Leif Kicklighter to give Billingsley one aboard with one out. An RBI double from Richie Smith would score Kicklighter to tie the game at five-all.

The tie would not last long as Maplesville added one more run in the top of the sixth thanks to a RBI single from Jones that would make it a one run, 6-5 lead.

Maplesville scored two more runs in the seventh inning to make it a 8-5 lead.

Billingsley would manage to put two runners aboard during the home half of the seventh, but neither was able to reach home plate.

Hobbs handled the pitching for Maplesville in Game 2. He allowed three earned runs on seven hits with one strikeout and three walks.

He also led the Red Devils at the plate with a 2-for-3 performance with a pair of singles and a RBI.

Motley took the mound for Billingsley during Game 2 and threw five innings, while allowing three earned runs on eight hits with seven walks and seven strikeouts.

Cook led the Bears at the plate with a 2-for-4 performance with a single, double and three RBIs.

Argent to play golf at University of Mobile