Chilton County E-911 received several reports of trees down and damage in both Clanton and Verbena due to 55-plus mph winds that tore through the county.

Included among the myriad of trees down were multiple specimens at Goose Pond Park in Clanton, including one that destroyed the sign on Seventh Street N. 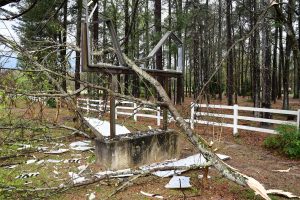 A large portion of the roof over the building containing City Barber Shop on Second Avenue in downtown Clanton was torn off and hurled into the street.

Members of local law enforcement on the scene said the building had been occupied during the event, but no one was injured.

View of the Clanton storm damage from above… from William Scarbrough #alwx @NWSBirmingham @WVTM13 @chiltonweather pic.twitter.com/h59pWb4qkH

The Chilton County Sheriff’s Office had no reports of injuries as of 7 p.m.

There were reports of other damage to structures across social media in the wake of the strong winds.

Alabama Power reported approximately 2,050 outages as of 6 p.m. in Chilton County, which caused traffic lights at several intersections in downtown Clanton to be out.

“Crews are working to restore service,” Alabama Power said in a statement.