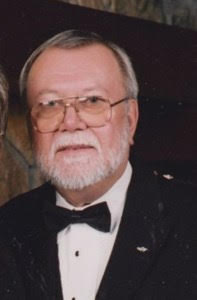 A visitation will be held on Tuesday, March 12 from 6:00 until 8:00 p.m. at Moss Service Funeral Home. A Celebration of Life service will be on Wednesday, March 13 at St. John’s Evangelical Protestant Church, Cullman, AL. He will Lie-in-State from 1:00 until 2:00 p.m. Rev. Bob Kurtz and Rev. John Richter will officiate. Burial will follow in Nectar Cemetery, Nectar, AL.

He was preceded in death by his parents: Jesse and Pearl Gunn; son-in-law, Fred Chouinard; father-in-law, Phillip Hill and brother-in-law, Wayne Hill

Mr. Gunn was a graduate of Jemison High School, Jemison, AL. and the University of Alabama, Birmingham, AL. He was director of Radiology at several hospitals. He was the third person in the United States to be registered in Nuclear Medicine Technology. He was a member of The Nuclear Medicine Technology Board, The American Registry of Radiologic Technologists. He belonged to the Cullman Masonic Lodge, Eastern Star, Birmingham Football Officials Associations, and was on the board of Directors and Vice President of Terri Pines C.C. In 1974 he was voted Man of the Year. The award was given for a genuine desire to help others. Mr. Gunn enjoyed playing golf, boating for many years, and cheering for the Alabama Crimson Tide.

Condolences and special memories may be left at mossservicefh.com