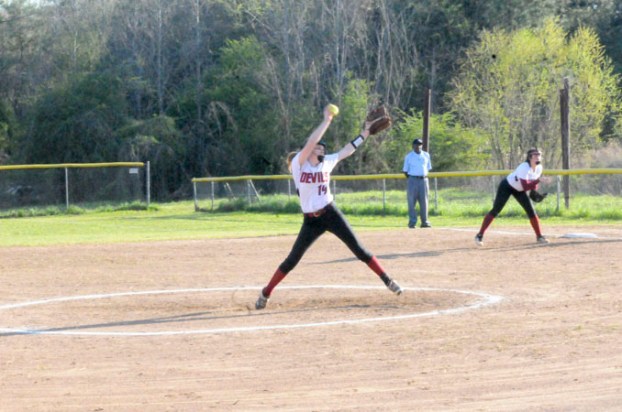 Special from The Selma Times-Journal

The game was called after three innings because of the state’s 15-run mercy rule. The Lady Hornets fall to 2-7.

Smith struck out seven of the nine Dallas County batters she faced.

The other two outs came on ground balls. Smith shifted the credit to her teammates.

“We were quick on defense in the infield and made no errors, we swung the bats really well,” Smith said.

“We’re making too many mistakes,” Creel said. “We’ve had good practices, but we need to translate that into games. Once we start doing that, we’ll be fine.”

Laci Cook, Avery Reed and Emily McGee all led Maplesville with three RBI. Caitlin Burnett and Emilee Smith both had two RBI. Jaycie Armstrong and Gracie Harrison each drove in a run.  Cook led the Lady Devils with three hits.

Maplesville took control from the first pitch, jumping out to a 4-0 first inning lead.

The Lady Devils exploded for 13 runs in the second, then added six more runs during the game’s final inning.

Creel remains confident in the Lady Hornets, who lost to Maplesville 15-0 last month.

“I knew we’d have a young team this year and struggle a lot with pitching and catching,” Creel said. “We only have two seniors and two juniors.”