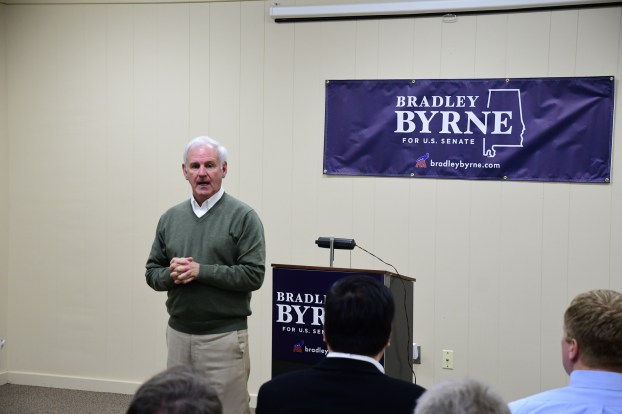 U.S. Rep. Bradley Byrne (R-Fairhope) has announced his intention to run against incumbent Sen. Doug Jones in the upcoming 2020 race.

Byrne held a town hall meeting at the Chilton/Clanton Public Library on March 19 in support of his bid for the office.

“I am the Congressman from the far end of the state down in Mobile, but as you probably know, I am running for United States Senate,” Byrne said at the onset of the meeting. “One thing that has been very well received by my constituents is I do a lot of town halls. I do more town halls than almost any other member (of Congress.) I think the reason they have been so successful is they are a direct opportunity for us to have a discussion about issues of concern to you.”

Byrne immediately opened up the floor for questions from the audience, a format he said he prefers in his town halls.

The first question was why Byrne chose to run against Jones for the Senate seat.

“I look at our newest Senator, Doug Jones, who is a friend of mine. I have nothing against him personally,” Byrne said. “Doug does not share the values that you and I share. His first speech on the floor of the United States Senate was in opposition to gun rights. He voted against the abortion bill that would ban abortion after 20 weeks when we know a child feels pain in a mother’s womb.

“He voted against Judge (Brett) Kavanaugh. He voted against the wall last week. In general, he has opposed President (Donald) Trump. You think about those five things and the values that expresses, and where we are. I think they are two different things. I think we should have a senator in Alabama who represents us. If he wants to believe what he believes that’s fine. It’s America; he has the right to do that. But what he believes is not in keeping with what we in Alabama believe and who we are fundamentally.”

Byrne told those in attendance that a difference in values was another major reason he decided to run.

“I look in Washington, D.C., and I see a tremendous disconnect between our values and the values you see up there,” he said. “Just about across the board. That really bothers me, because it’s our values that make America who we are. It’s good that we are rich and we have all this stuff, but it’s not the stuff that makes America great, it’s the people and the values they have had for generations. I fear that we are losing that in Washington, and I think it’s extremely important for you and I to find somebody to represent us that reflect our values.”

When asked about his stance on abortion, Byrne said that he is “strong pro-life” and that he believes life begins at the moment of conception.

He also touched on the Second Amendment after fielding a question related to the topic from a veteran in the audience.

Byrne invited anyone interested in finding out more about him and his platform to visit bradleybyrne.com.