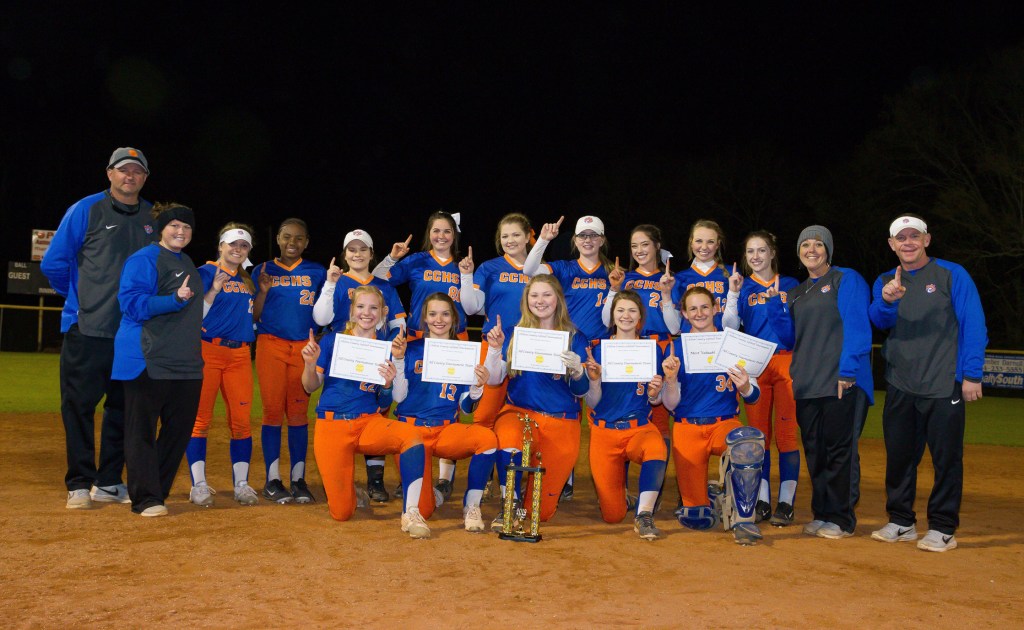 CCHS regained their crown after defeating defending-champion Jemison 13-3 in six innings to win the 2019 county softball tournament on March 16.

“We came into this tournament knowing that if we play defense and hit the ball, nobody can beat us,” CCHS senior Caelyn Griffin said.

After both teams traded runs for the first couple of innings, the momentum swung in the Tigers’ favor thanks to a three-run blast to center field by senior Hallie Arnold in the bottom of the fourth inning.

“I knew that my previous at-bats were bad, so I knew I had to step up and do something,” Arnold chuckled. “I just visualized where I needed to hit it.”

Fortunately for CCHS, that visualization was over the fence.

Her home run extended the CCHS lead to 7-3, and the Tigers finished it off two innings later. 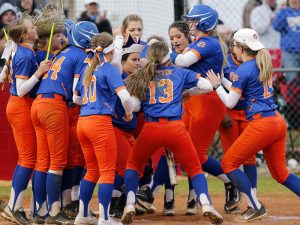 CCHS senior Hallie Arnold is mobbed by her teammates at home plate following a three-run home run in the title game. (Photo by Brandon Sumrall/Special)

Freshman Marlie Giles was named tournament MVP with several timely hits, including a solo shot to get the Tigers on the board in the first inning.

“I don’t want to stop,” Giles said. “I just want to keep getting better.”

The depth of the CCHS lineup was on display. Some of the players that stood out at the plate included Griffin, Emily Easterling, Sarah Elizabeth Watts and Emma Locke.

“This year is our year to go far,” Giles said. “There’s no disconnection and we all play as one.”

Jemison had a chance to answer with a big inning of its own with runners on second and third and no outs in the fifth inning, but flied out into a 9-2-5 triple play to squander the opportunity.

According to Giles, that was the moment in the game when she felt the title was clearly in reach.

“When we got those three outs, it was pretty big,” Giles said. “That really changed the momentum.”

Emotions were running high during the championship for both players and fans, which created some palpable moments.

One of those moments included a Jemison pitcher getting tossed from the game after hitting a batter with a pitch in the fifth inning. 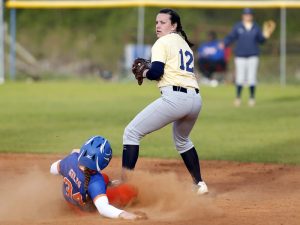 Kelsey Porter (No. 12) of Jemison looks to turn a double play. (Photo by Brandon Sumrall/Special)

However, after a lengthy discussion between the umpires and coaches, she was allowed to return to the game and the action resumed.

Once the dust settled, CCHS ended the inning with four runs and an even larger lead.

Emma Deason started the game in the circle for CCHS, while Makalah Skinner toed the rubber for the Panthers.

Emma Allred and Chloe Eddins gave Jemison the early advantage with a pair of RBIs in the first couple of innings.

With the county tournament under their belt, the Tigers now look to shift their entire focus to winning the area tournament as well.