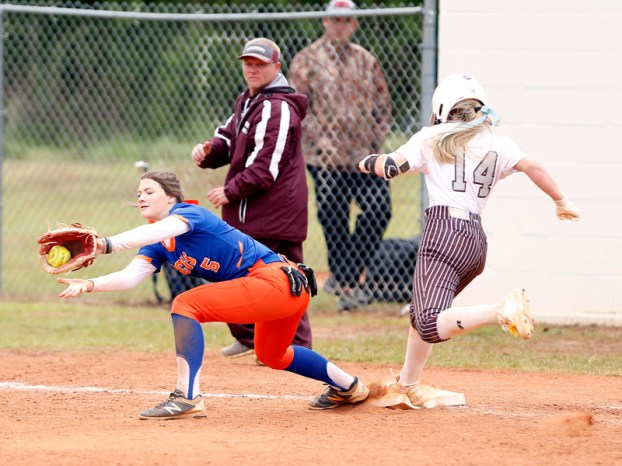 Lindsey Burnett (No. 14) of Thorsby attempts to beat out an infield hit. (Photo by Brandon Sumrall/Special)

The teams squared off in the semifinals and showed why they were two of the favorites heading into the event.

It was a nail-biter, which CCHS eventually won 11-10 in eight innings.

There were two halves to the game, as both teams scored a combined 16 runs in the first three innings.

However, the hitting barrage leveled out and the game morphed into a pitcher’s dual and strategy plays for the final five innings.

Thorsby led by one run with three outs remaining in both the seventh and eighth innings but were unable to close the deal on both accounts. 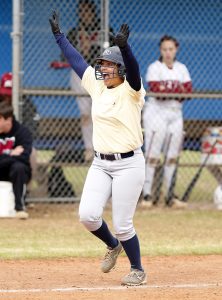 Instead, the Tigers showed resiliency and were able to come back.

Marlie Giles stroked a screaming line drive into the right field gap to drive in the winning runs and secure the Tigers’ spot in the title game later that day.

Jemison was able to win its semifinal matchup as well against Maplesville but did so in far less dramatic fashion.

Kinley Bolton started for the Panthers and pitched a shutout as Jemison handily won 14-0 in five innings.

Erristen Evans kicked off the scoring with an RBI double down the left field line to help JHS grab a 4-0 lead after one.

The runs would keep on coming after Bolton helped out her own cause with an RBI single, and Chloe Eddins belted a three-run bomb to center field. Jemison led 9-0 after two innings.

The Red Devils threatened to get on the scoreboard, but they left two runners stranded in scoring position in both the fourth and fifth innings.