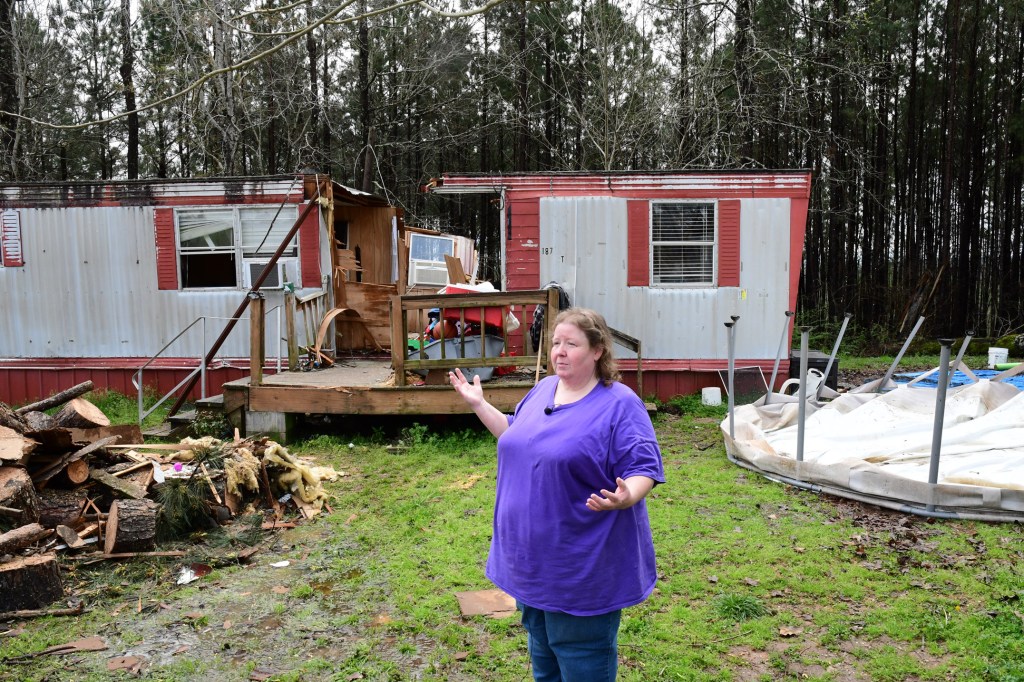 Mary Price was inside of a trailer she rents on County Road 55 in Gap of the Mountain when a large pine tree fell through the home due to high winds in the severe weather that passed through Chilton County on March 14. (J.R. TIDWELL/ADVERTISER)

Mary Price was at home in the trailer she rents on County Road 55 in Gap of the Mountain watching live coverage during the severe weather event that passed through Chilton County on March 14.

Her husband and son were at a nearby restaurant purchasing dinner.

“I thought (the weather) was going the other way, so I wasn’t scared or anything,” she said.

Price said she heard the live weather coverage mention the storm system was passing over Thorsby, when “all of a sudden, the power goes off. It starts raining real hard, and I hear an awful sound. It scared me, so I jumped up and ran to the bathroom.”

A storm system that likely produced a funnel cloud passed through Gap of the Mountain.

The severe weather included high winds, the probable culprit behind a large pine tree falling through the trailer Price was in.

“Before I could get in the (bathtub), (the tree) had hit the trailer,” she said. “It was just ‘bam,’ and the trailer sort of bounced. I thought the trailer was getting picked up.”

Price said she was on the phone with her son when the wind caused the tree to crash through the trailer, right in the area she had been occupying.

Price said she didn’t “really get scared and panic” until the weather had left but she realized the tree falling through the home had left her trapped inside.

“That’s when I panicked,” she said. “I could see the (area where the tree hit) fallen, but I didn’t know if the rest of the trailer was going to fall on me. I didn’t know what to do.”

Price said a neighbor from just down the road came to help her. He took a hammer to the back door of the trailer, which Price said was “messed up.” He hit the door until it gave way, providing an exit for her.

The tree, which was approximately 2-feet wide and stood behind the home, crashed through the front and back walls and ceiling of the trailer before damaging the satellite dish in the front yard.

Shane Mayfield of the Chilton County Sheriff’s Office was the first member of law enforcement to reach Price’s home.

Sheriff John Shearon told Price on March 15 that once CCSO received the call that she was trapped in her home, she was their “top priority.”

Trees were down across roads leading to the area, but Shearon said Mayfield managed to find a path to the trailer to check on Price.

Though she said she was “emotionally just a wreck,” Price sustained only one minor scratch on her arm during the ordeal.

“I feel like God protected me and took care of me,” she said. “There’s a purpose for everything, and I just don’t know what it is. I’m lucky. God blessed me. That’s all I can say.”

Price said that by the next morning two of her neighbors, Tommy and Robbie Smitherman, had cut the tree into manageable pieces and had torn it out of the trailer in order for the family to be able to get at what possessions they could salvage inside.

“It’s a little disheartening to go in there, pick through and see what you can get,” she said. “My son had a newspaper from the day Paul ‘Bear’ Bryant died. It was in a frame. He had it hanging in the living room. It is totally destroyed. We couldn’t save it, and he’s upset about that. Pictures you can replace. Everything is replaceable, I’m just thankful I made it out.”

Price said she and her family are working on finding a storage option for the items pulled from the home until they figure out their living arrangements.