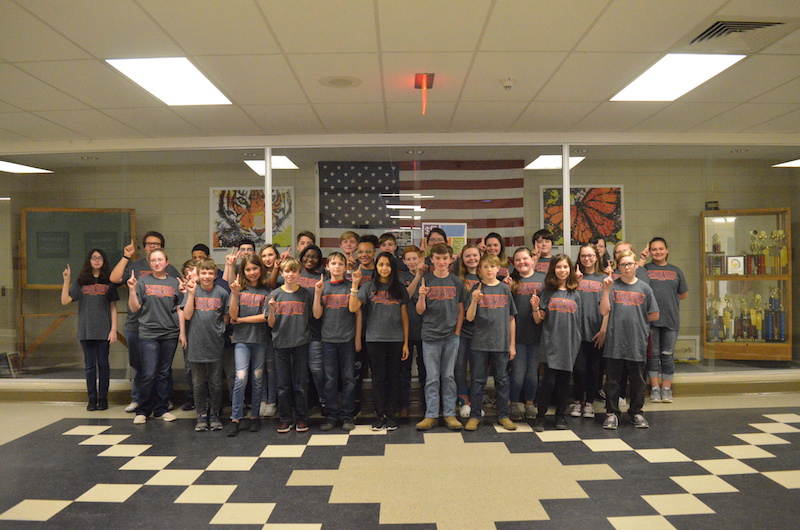 Clanton Middle seventh-grade band students made school history when they received all superior ratings at the Music Performance Assessment on March 1.

A superior rating is the highest that can be given at the event.

Students performed a total of four songs, three that had been practiced and one that was totally new.

“This is the first time we have ever gotten one superior — let alone all superiors,” band director Casey Clark said.

Clark said he was proud of the students’ hard work.

“It’s an a very good group of kids,” Clark said. “They have worked really hard.”

The assessment gives the band and conductor an opportunity to be scored and receive feedback.

“There is a rubric that they are scoring with a specific set of guidelines per whatever your classification is,” Clark said.

The assessment was held at the University of Alabama.

The panel of three judges for the event were former band directors with successful programs and decades of experience.

During each performance, judges were looking for what the students and director could do better.

The second portion of the assessment required students to sight read a sheet of music and play a song they had not practiced.

“As a director, I am given a few minutes to analyze the score itself, and the kids are given a copy of the music,” Clark said. “I get seven minutes of instruction time to instruct them through a piece they have never seen before.”

Bands receive copies of the judges’ comments in written and audio form. Judges were watching from the balcony and recording live comments for the students during the performance.

“Across the Serengeti” was one of the students’ favorites of the performances.

“I just like the beat,” Niya Jordan, who plays the flute, said.

“It was really pretty whenever we all played it together with the percussion and the woodwind and the brass together,” Anna said.

Eli Romine, who plays the trombone, liked the song because “it sounds the most unique out of them all.”

Audrey Armstrong, who plays the flute, said “Furioso” by Robert W. Smith was her favorite of the performance.

“It was more upbeat,” Audrey said.

She said she had been “nervous and excited” about the performance.

“I really liked the rhythm and the French horn part,” Malley said.

Students had practiced individually at home and as a group at school in preparation for the assessment.

Anna said when she practiced at home, she tried to keep the rhythms of the song in mind.

“I was extremely nervous,” Anna said, of being on stage for the assessment.

“I was kind of nervous on stage,” she said.

Eli said he thought they “sounded good” going into the assessment.

He said the stage being so large surprised him.

Audrey said she enjoyed doing so well after all of the work they had put in.

Malley said she really enjoyed spending time with the band on the way to the performance.

However, she said once the music started it became easier for her.

In addition to overcoming nervousness, there were a few challenges for the students.

Anna said trying to stay with the pace of the songs could sometimes be a challenge for her. Audrey said playing continuously for the performance was challenging at times.

The band will receive a trophy for their performance, which will be displayed in the school’s trophy case. A plaque recognizing their achievement will be placed in the band room.