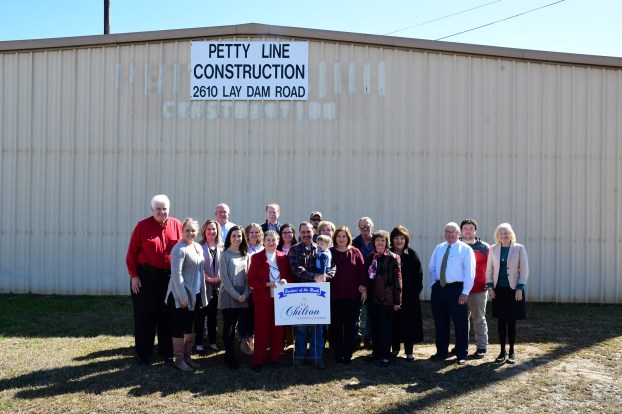 Petty Line Construction in Clanton was honored as the Chilton County Chamber of Commerce’s business of the month for March. Barbara and Edwin Petty hold the sign while flanked by representatives of the Chamber and other member businesses. (J.R. TIDWELL/ADVERTISER)

The Chilton County Chamber of Commerce honored Petty Line Construction in Clanton as its business of the month for March.

Barbara and Edwin Petty were presented with the accompanying sign during a small ceremony on March 7.

Both said it was an “honor” to have their business recognized.

“We have been in business 43 years last Friday,” Barbara said. “My husband Bill worked for a line construction company. They weren’t meeting the demand of the co-ops, so he wanted to start the business. I was hesitant about it, because I knew I would be the one that would be in the office, because he didn’t like office work. He liked to be out in the field. I finally agreed, and I have been doing it ever since.”

According to company President Edwin, Bill and Barbara’s son, Petty Line does industrial electrical work at businesses like plants and for co-ops.

“We are an industrial electrical contractor,” Barbara said. “We are licensed in Alabama, Tennessee and Mississippi. We build substations and power lines.”

Edwin took over as president of the company when his father passed away in 1985.

Petty Line was started as a family business and remains one today.

“We have always tried to treat everybody like we would want to be treated,” Edwin said. “We are a family company. We want to treat our employees like family and always do a good job for our customers.”

When asked about how Petty Line has been going strong all these years, Barbara said she first gives credit to God.

“Then, I give credit to good employees,” she said. “We try to do a good job, so our contacts will call us back for more work.”

Chamber executive director Francine Wasden said visiting the Petty Line Construction office shows how they have a local impact over the years.

“When I walked down the hall at their office, I saw all the pictures of ball teams and pageant queens they have sponsored in our community,” she said. “That says it all for me.”

By J.R. TIDWELL / Editor Students at Jemison Intermediate School learned about disaster safety and preparedness during a program in... read more