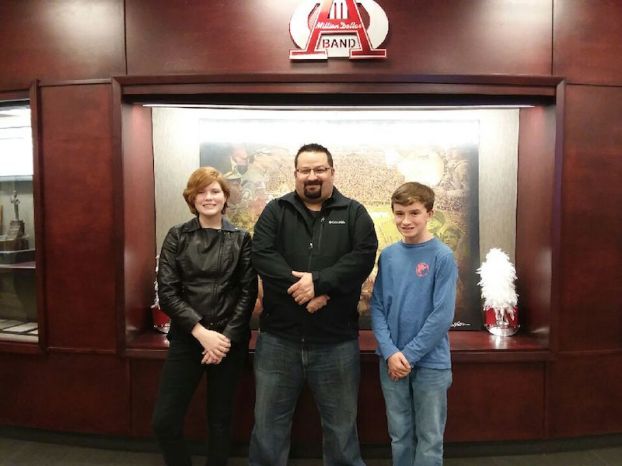 The event was held in the Moody Music Building at the University of Alabama. Rehearsals were held in the room where the Million Dollar Band performs.

“It’s a privilege to be able to make it and do this,” Joshua said.

“It was really exciting because I didn’t expect it,” Lynn said

To qualify for consideration in Honor Band, students played pieces that they had practiced in addition to a number of scales during the audition.

“I have just have always wanted to do something and use my skill and show it to other people,” Joshua said.

Lynn said her sister and father had each been in band, and this is how she got interested.

“We learned five pieces of music in one and a half days, so it was kind of fast-paced,” Joshua said. “It was kind of cool, too, because you got to meet other people and see how they got taught stuff.”

“I loved how fast-paced it was,” Lynn said.

“It’s a good experience for them,” Clark said, commenting that it exposes the students to what it is like being on a college campus and being “self-reliant.”

During the day and a half of the Honor Band practices, Joshua was given a leadership position. He said some others students came to him with questions about how to do things.

“It was a privilege to have a position like that,” Joshua said.

Lynn said she had to adjust to working with people she did not know.

Joshua said he also had to get used to a new conductor.

Of the musical pieces that the Honor Band performed, a medley of Disney film favorites, including “Under the Sea” and “Friend Like Me,” was a favorite for both Joshua and Lynn.

“It was pretty awesome as a percussionist to play all of the instruments that we might not have here,” Joshua said.