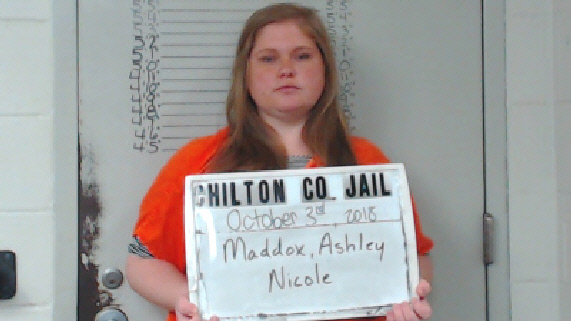 Maddox was arrested on Oct. 3, 2018, on 12 charges that involved alleged sexual contact with students under the age of 19, including two felony charges and 10 misdemeanor charges.

According to a press release from C.J. Robinson, the chief deputy district attorney for the 19th Judicial Circuit, Maddox had contact with the victims through her position as an educator at Chilton County High School.

“She entered a guilty plea to multiple Class A misdemeanors, including two counts of A School Employee Distributing Obscene Material to a Student and Contributing to the Delinquency of a Minor,” according to the release.

Class A misdemeanors are punishable by up to one year in county jail and a fine of up to $6,000.

Judge Sibley Reynolds gave Maddox a 15-day suspended sentence on each Class A misdemeanor. Maddox has also been ordered to pay fines and court costs and then be placed on probation.

Three victims were discovered as part of an investigation made by the Clanton Police Department into the case.

“When this case began, we believed we would be able to present a strong case with findings from the Clanton Police Department,” Robinson said. “As the investigation progressed, we were informed some of the electronic evidence could not be retrieved from international servers.

“Our office has always included the victims of crime when engaging in plea negotiations. I fully acknowledge that no one is affected more by the outcome of a case than the victim. And for that reason, I have always and will always include them in every step of the decision-making process. That was done extensively in this case.

“Any time the public trust is betrayed by someone in a position of authority over our children, I want to see a lengthy prison sentence. That didn’t happen in this case, because as prosecutors, we must take the victims’ wishes and concerns into account while balancing our search for truth and our attempts to do justice. This case is now over, and I hope these young men can move forward.”