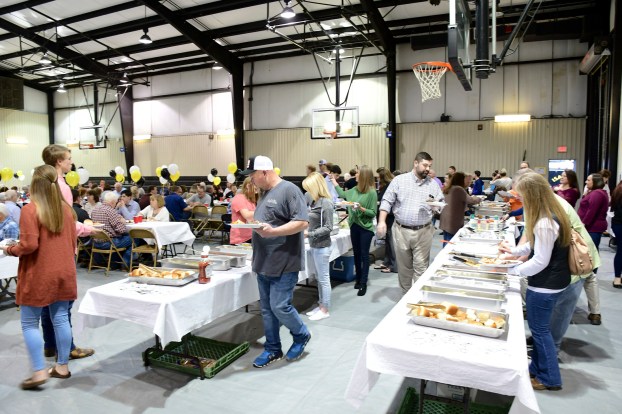 The Isabella gymnasium was transformed into the host site of the 24th Annual Mustang Feast on March 2. (Photo by Anthony Richards)

The Mustang Feast raised money for the athletic programs at Isabella High School for the 24th consecutive year on March 2.

Dignitaries from throughout the county attended the event, which has become the primary sports fundraiser for IHS.

Roughly 350 people took part in the community camaraderie during the night, while enjoying steak, seafood and barbecue along with an array of sides.

“The people in this county are just so supportive of all the programs,” IHS Booster Club President Buddy Baker said.

Funds in past years have gone toward helping get an all-purpose facility, but since that has just about come to fruition, the focus has shifted to other needs. 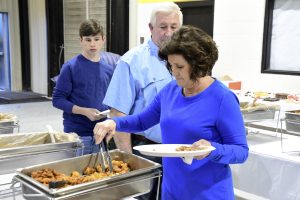 Catfish was one of the items offered during the all-you-can-eat fundraiser. (Photo by Anthony Richards)

“We’ve still got some work to do on the baseball field with a fencing project going on there,” Baker said. “There’s always stuff going on.”

One of the unique things about the Mustang Feast is that the proceeds are not earmarked for one particular sport, but benefit the entire department.

The booster club also provides pregame meals for all teams that make the playoffs.

Billy Veazey was the founder of the Mustang Feast.

“He was probably our most beloved booster club president that we’ve had here,” Baker said. “He was a very personable guy.”

According to Baker, the event has become a tradition of school pride that has been passed down through the generations.

The booster club hopes to plan something special with a surprise food item for the 25th anniversary of the event a year from now.

Christian Fortner has signed to play football and basketball at Huntingdon College. He has been named the All-Advertiser Player of... read more