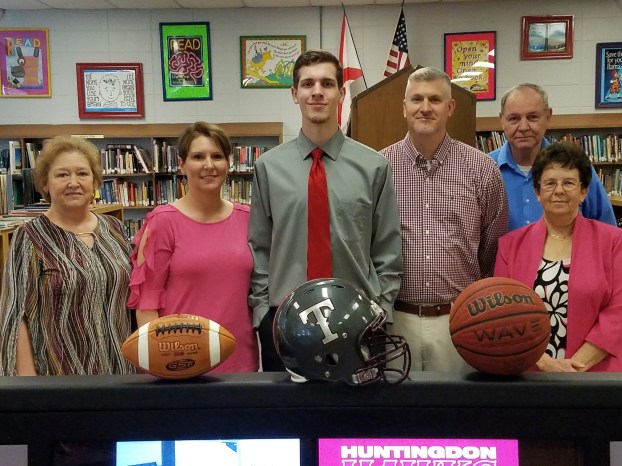 Christian Fortner of Thorsby is surrounded by family after making his announcement to play football and basketball at Huntingdon College. (Photo by Anthony Richards)

Christian Fortner has signed to play football and basketball at Huntingdon College.

He has been named the All-Advertiser Player of the Year in Chilton County in both sports in recent years and looks to continue his progression at the next level.

Several schools had shown interest in Fortner throughout the recruiting process, but none that felt as right as Huntingdon.

On the football side of things, Fortner will have an opportunity to play quarterback and eventually challenge for the starting spot as he matures into the position.

“I had a couple of schools contact me about being a tight end or wide receiver, but I really didn’t want to do that.”

According to Fortner, all he wanted was the chance to play quarterback at the next level. He will get that chance at Huntingdon. 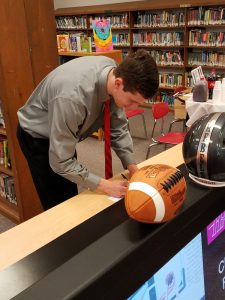 Fortner fills out the paperwork to make it official. (Photo by Anthony Richards)

“I’m not ready for my sports career to be over yet,” Fortner said.

The opportunity to play basketball and football was a decisive factor in Fortner’s final decision.

“That was one of the main selling points,” Fortner said.

Fortner gained 2,416 total yards and scored 31 touchdowns in helping lead Thorsby to the playoffs for the second-straight season in 2018.

He also averaged 24.8 points per game his senior season on the basketball court, which included posting 19 double-doubles and five triple-doubles in 26 games.

Fortner’s potential as a quarterback appears still on the uptick after not being thrust into the quarterback role until a later age than many others.

“Two years ago after a 1-9 season, if you had told me that I’d be signing to go play football in college, I’d have thought you were crazy,” Fortner said.

The pipeline of football talent between Chilton County Schools and Huntingdon College continues to grow with Fortner’s signing.

He will join fellow teammate Tyler Jackson, who also committed with the Hawks.

By BRANDON SUMRALL / Special to the Advertiser The Chilton County Lady Tigers improved to .500 (3-3) on the young... read more