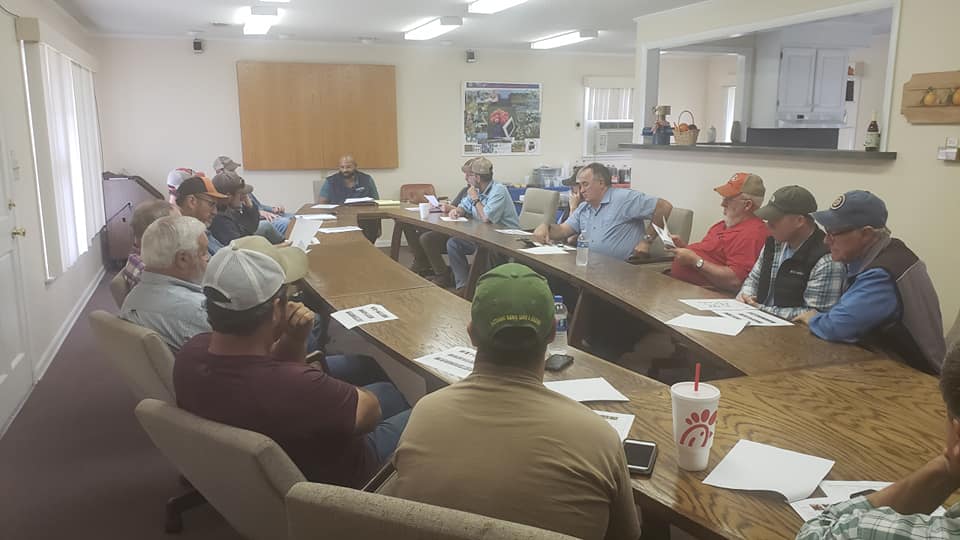 The Alabama Cooperative Extension System and the Chilton Research and Extension Center hosted a meeting for local farmers on March 1 to discuss the impact of a predicted freeze on March 4-5 and what might be done to protect crops that might be affected. (BOOZER FARMS/CONTRIBUTED)

The National Weather Service in Birmingham has issued a freeze warning for central Alabama that will take effect on March 4 at 6 p.m. and last through 10 a.m. on March 5 with more possibly to come.

This late freeze might have a negative impact on some local crops that have already begun to bloom.

“A very cold air mass will settle over central Alabama this week,” according to the warning published by the NWS at 4:19 a.m. on March 4. “Since we have had mild temperatures of late, the growing season has already begun for many across central Alabama. Therefore, we will commence our spring frost advisory and freezing warning program. This will be a multi-night freeze event and freeze warnings will likely be needed through Thursday morning.”

The NWS predicts that temperatures will range from the upper 20s to lower 30s on the night of March 4.

“This will likely result in some damage to early budding and blooming plants and trees,” said the NWS. “A freeze warning means sub-freezing temperatures are imminent or highly likely. These conditions will kill crops and other sensitive vegetation.”

Due to this threat of freezing temperatures, the Alabama Cooperative Extension System and the Chilton Research and Extension Center hosted a meeting for Chilton County farmers on March 1 to discuss what measures might be taken to preserve different crops.

Taylor (Boozer) Hatchett of Boozer Farms was on hand at the meeting and posted about the event on social media.

“Friday (March 1), I sat around a table surrounded by some of the finest men I know,” said Hatchett in a post. “Every peach grower in the county wasn’t present, but I would say that a large majority of the county’s peach acreage was represented. (The meeting) was an opportunity for growers to come together and talk about the threat of the severe freeze set to move in (March 4) and to share wisdom about past experiences and knowledge of anything that might be done to possibly save the peach crop.”

Hatchett said during an interview on March 4 that Boozer Farms is a “smaller farm with high diversity,” and what they do to try to mitigate the impact of the weather might not be the same techniques used by larger growers that have a higher acreage of one crop, such as peaches.

Hatchett said Boozer Farms’ peaches are at the highest elevation on the property, so the group will be focusing its attention on the blueberry crop instead, which sits in a lower area.

“We figure the peaches will be at the warmest temperature and the hardest to impact, so we will be focusing on our blueberries,” she said. “We covered our strawberries and figs. We will be trying several different things tonight.”

Boozer Farms said in the post that strawberries will rebloom, but peaches and blueberries will not.

Hatchett said the group will make several small fires, essentially just embers, in the area to try to help keep the temperature warmer around the crop. They will also use an air blast sprayer to blow air over the crop.

While smaller outfits may use a smaller device, Hatchett said larger farms may use wind machines or even helicopters to try to circulate warmer air over the peach crops to try to save them.

The idea is the same concept as using a ceiling fan to circulate air in a room during the winter.

Warmer air pockets settle over colder air, and the sprayers, wind machines or helicopters are methods to try and move that warmer air closer to the ground.

Hatchett said Boozer Farms will also spray water from its underground well onto the blueberries.

She said since the water from the well is above freezing, even that might help protect the fruit from the colder air.

When it comes to crops like peaches, every single degree can make a difference.

“Ideally, you want to stay above 28 degrees,” Hatchett said. “Any lower than that and you will have more damage. One degree might mean the difference between a total loss and a good crop.”

The freeze warning may start with the night of March 4, but the temperature may turn even colder in the following days.

“Tomorrow (March 5) night may have even colder temperatures,” Hatchett said. “We might do just the water and wind tonight, and then tomorrow pull out all the stops (with the fires).”

Hatchett said what is “awesome” about Chilton County is the support from friends in the area. She said she has had several people both wish the farm well and ask if there is anything that can be done to help.

“My prayer is that the temperature will not drop as low as it is forecast,” Boozer Farms said in the post. “If it is God’s will and that if that is not within His will that He will provide exactly what is needed for each and every person and family that is affected by the freeze. I am reassured that although I don’t know what the next three days may hold, [but] He does and He has a plan and a purpose. Nothing will surprise Him or find Him unprepared.

“We appreciate your prayers for all of the farmers and their families and employees! We are blessed here in Chilton Co. and the next few days won’t change that at all.”