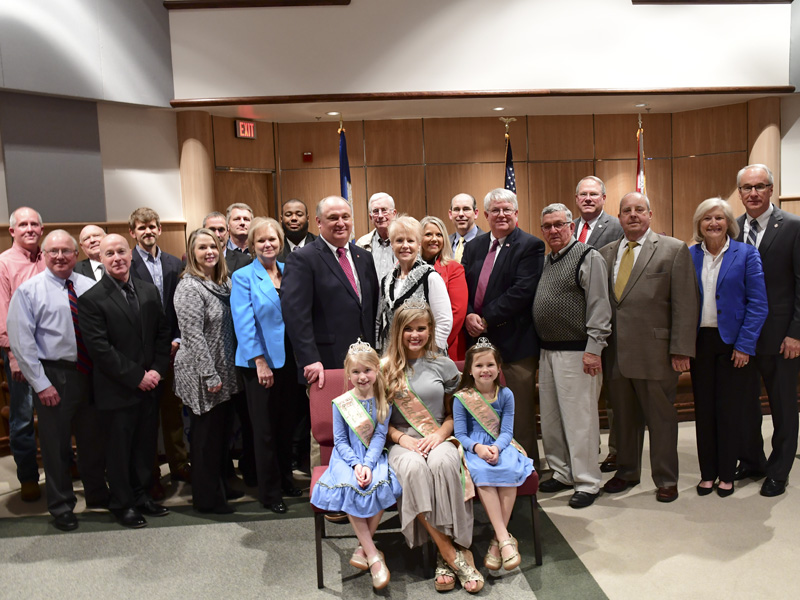 Mayors and representatives throughout Chilton County were on hand for the announcement of the Alabama Farm Center at ALFA Centennial Park. (Photo by Anthony Richards)

Remember this week, because it could go down in history as the week that changed the scope of Chilton County’s future.

The announcement of the plan to build the Alabama Farm Center at ALFA Centennial Park at Exit 212 in Clanton is a major step in the right direction.

Doubters of the plan will state that they have heard of positive things in the past that hit snags along the way and failed to come to fruition.

I cannot speak for situations that have happened in the past, but from everything that has come out about the farm center’s plan, I don’t believe that will be the case this time around.

Projects live and die by the backing that they have to see them through completion.

If I had to pick an organization to be partnered with in the state, ALFA would be toward the top of the list.

I would ask those who bring up a recent lack of success to go back and look into who was supporting those ventures and did they have the backing of a steady outfit, such as ALFA.

ALFA’s involvement alone makes me feel confident that the project will succeed.

The project has been continually compared to similar complexes in Perry, Georgia, and Grand Island, Nebraska.

I have actually been to the complex in Perry during an RV show and understand the scale that they are going for.

Although agricultural shows are the initial thought of what the Alabama Farm Center will represent, after all the word farm is in the name, it will have the opportunity to host far more than that.

There are not many weekends in the year when something is not going on at the Perry site.

I know the farm center is an ambitious goal, but it is about time that Chilton County shoots for the stars.

Sometimes future success means taking some risks. I would rank the farm center as a conservative risk, but one that is worth taking.

The project is designed to help grow the county while also leaning on its rich agricultural history.

Tapping into that history makes the farm center look like a natural fit from almost every angle. It is as if the farm center and Chilton County were made for each other.

Construction is estimated to cost $100-150 million, which is a lot of money to the average person.

However, if you consider that estimate includes 11 buildings including a main air-conditioned exhibition hall, it seems about right.

One of the things that has been slightly overlooked is the side effects that the farm center will create as a result.

Creating jobs and bringing in new businesses is just part of the equation. Over time the center’s economic impact is expected to lead to more funds for the Chilton County Board of Education and county improvement as a whole, such as road maintenance.

Now that the development plan is out there, it will surely draw the eye of prospective businesses, some of which may already be in the works.

The future looks bright in Chilton County, and as a resident, it feels pretty good to be wanted.

Column: Soccer has long-lasting potential in the county