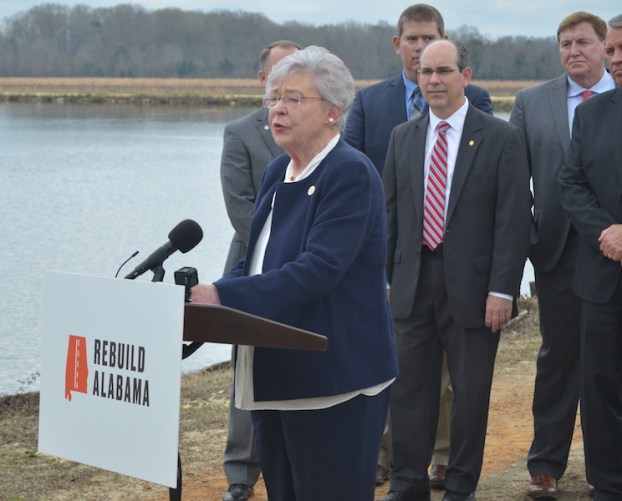 A county road in Maplesville was the site of Gov. Kay Ivey’s announcement of the Rebuild Alabama Infrastructure Bill on Feb. 27.

“Where we stand today, here in rural Alabama is a great example of why we need to improve Alabama’s infrastructure and increase our funding,” Ivey said.

The road where the announcement took place showed evidence of being patched in several places. Ivey said the bridge behind the assembled group was 55 years old.

“This bridge cannot withstand the weight of a big truck or a school bus,” Ivey said. “The road here … has been patched time and time again, but the patching has not been an adequate replacement for replacing the road, much less repaving it.”

The Rebuild Alabama plan proposes a 10-cent fuel tax, in addition to existing fuel taxes, to go directly to improving roads and infrastructure. The proposed increase would be spread out over three years with a 6 cent increase the first year, followed by 2-cent increases in the following years.

Indexing using the National Highway Construction Index will also be implemented, which would determine when increases in funding due to inflation are needed. Ivey said index increases would be a maximum of 1 cent every two years.

Rep. Bill Poole (R-AL District 63) will introduce the bill in the state House of Representatives.

“Bill has been very instrumental in making this effort effective in reality,” Ivey said.

“I thank the governor as well for her leadership on this issue,” Chambliss said. “We are behind.”

He said the plan, developed by Poole through listening to stakeholders and other leaders for ideas, addresses the needs of Alabama. He said although a lot of work has been done, there is a lot more to do.

“This reasonable increase will also be necessary to help remain competitive with our neighboring states,” Ivey said. “They have already made major investments in their infrastructure.”

Funding for infrastructure in Alabama has remained stagnant.

“Our state has not done enough to maintain our roadways and our highways,” Ivey said. “Twenty-seven years have gone by without any change. Not even a nickel. No change in the amount of investment in our infrastructure.”

Ivey said damage to vehicles from poorly-maintained roadways cost the average driver $507 a year in Alabama.

Measures have also been included in the bill to ensure it is used solely for infrastructure.

“We have strong accountability in this bill to protect out tax payers,” Ivey said.

Ivey pointed out the importance of highway accessibility and a well-maintained port at Mobile for business and agriculture.

“By increasing our investment in infrastructure, we are not only increasing our investment in roads. We are investing in economic development, safety, our communities and the future of our state,” Ivey said. “This is a hard issue, I know that … it is an issue that we will have to work hard to get through, but we will be successful because it. I know that in Alabama we have capable people to tackle even the toughest of challenges.”

Infrastructure has also been tied to jobs.

“The Federal Highway Administration projects that every $500 million that is invested in infrastructure is 14,000 new jobs, so clearly we must address this issue,” Ivey said.

The bill will be a top priority at the beginning of the legislative session, according to State Speaker of the House Rep. Mac McCutcheon.

By JOYANNA LOVE/ Senior Staff Writer The Alabama Education Association has named Clanton Intermediate School as one of its Be... read more