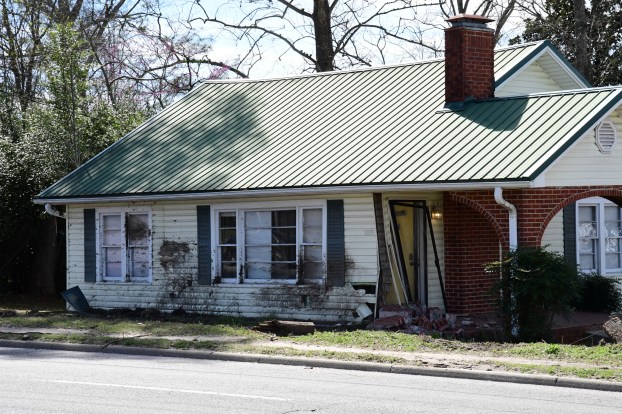 A Chilton County Sheriff’s Office deputy hydroplaned and ran off Seventh Street S into the side of a house near Auto Zone in Clanton on Feb. 24. (J.R. TIDWELL/ADVERTISER)

A Chilton County Sheriff’s Office deputy hydroplaned off of Seventh Street S in Clanton near Auto Zone and hit the side of a house during the early morning hours of Feb. 24.

According to Chilton County Sheriff John Shearon, the deputy was responding to a non-emergency call of a suspicious vehicle in Verbena around 2-3 a.m.

“It was raining really hard at the time,” Shearon said. “I was told it was raining so hard you could barely see.”

Shearon said the deputy’s Tahoe went down the side of the house after hydroplaning.

The deputy and reserve deputy who were in the CCSO vehicle sustained only minor injuries in the crash.

A female was asleep in the back bedroom of the house. She was unharmed by the accident.

“We are very thankful that neither the deputy, reserve deputy or the homeowner were hurt in the incident,” Shearon said.

Several days of rain hit Chilton County over the past week, leaving standing water on some roadways.

The area where the accident occurred is slightly downhill and into a curve while traveling southbound on Seventh Street, which may have contributed to the situation.

“That spot is kind of rough,” Shearon said. “(The deputy) just lost control of the vehicle.”

The house that was hit in the accident is close to the street.

Shearon said the deputy was not impaired in any way at the time of the accident.

“We are not exempt from the weather,” he said. “We can wreck just like anyone else. Accidents do happen.”

The house has some visible damage along the wall that was struck, including to the siding, front door and some brickwork near the door.

The matter has been handed over to the insurance company that represents the Sheriff’s Office, said Shearon.

By J.R. TIDWELL / Editor An 80-year-old man from Prattville died in a two-vehicle crash on Feb. 24. According to... read more