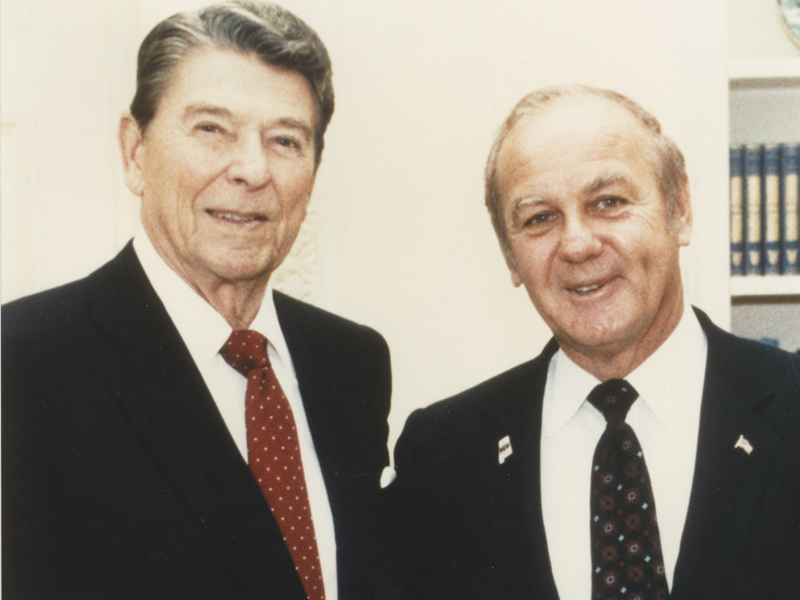 Meeting Ronald Reagan was a highlight for Lally Bates during his time representing postmasters in Washington, D.C. (Contributed photo)

Lally Bates was a lifelong supporter of Clanton and did his best over the years to give back to the community he called home.

He impacted the community in a variety of ways throughout the years, which meant that the news of his recent death was a sad moment for both family and residents.

Bates lived a full life in many ways.

He grew up during the Great Depression, joined the United States Marine Corps on his 18th birthday and fought in the Korean War during his service.

His grandson Brandon Bates shared the story of his grandfather being so eager to follow in his five brothers’ military footsteps that he boarded a bus to the recruiting station the morning he turned 18 and signed up.

During the Korean War, Bates was awarded three Purple Heart medals and the Bronze Star for valor before being seriously wounded.

One of the ways he remembered those that fought beside him and lost their lives during the Korean War, was helping in the planning process of building the Korean War Memorial in Washington, D.C.

“He wanted to make sure that those guys weren’t forgotten,” son Mickey Bates said.

He came back to the states and shifted his attention from active military service to community service. 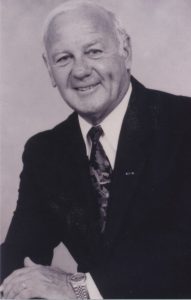 Bates was on the committee during the process of building the Korean War Memorial in Washington, D.C. and the peach water tower. (Contributed photo)

Some of the things he will be best remembered for include serving 35 years as the Clanton postmaster and his time as “the voice of the Tigers.”

There were so many different ways in which Bates found his way into people’s lives.

Whether it was with the duties of the American Legion or hearing his voice echo over the radio on Friday nights, it was a true connection.

“He served two terms representing the postmasters from all across America in Washington, D.C.,” Mickey Bates said. “He was a champion for the small rural post offices, because there was a tendency for those to be closed and combined with others, but he didn’t want those communities to lose their identity.”

“He was a very civic-oriented, hard-working and patriotic man,” Mickey Bates said.

Some of the other prominent positions that Lally Bates held included president of the chamber of commerce and a member of the committee that helped raise the funds for the construction of the peach water tower, which has become a signature landmark in the county.

“His example was to always do the right thing, treat people kindly and recognize everyone as an equal,” Mickey Bates said. “Love your fellow man, love your community and love your country. We just didn’t know any different.”

According to Mickey Bates, his father was always quick to help someone who asked for assistance.

A tradition began where Bates and other veterans would hand out small American flags at First Baptist Church in Clanton on Veterans Day, Memorial Day and the Fourth of July.

“He flew the flag every day at home and at work,” Mickey Bates said. “In all of his dealings, he wanted to make sure that there was a flag there.”