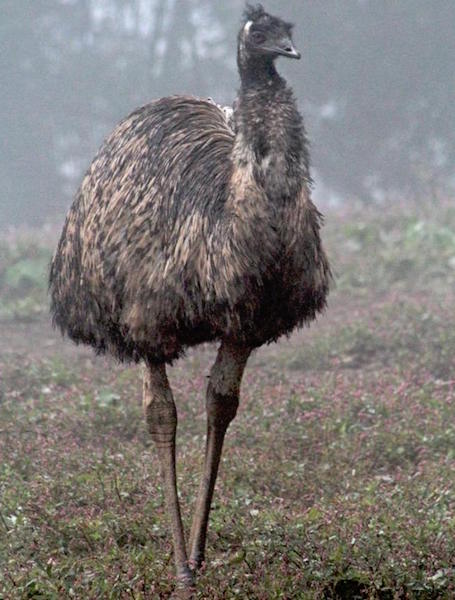 Harriot the emu was returned to Serenity Animal Farm in Clanton after being away from home for 12 days. (CONTRIBUTED)

Emus may be flightless birds, but that didn’t stop one large bird from taking flight from her home on the outskirts of Clanton.

Harriot the emu escaped from her pen at Serenity Animal Farm during feeding time on Feb. 9. She was finally returned home safely on Feb. 21 after being on the lam for 12 days.

Serenity Animal Farm owner Mark Bagley was out of town when Harriot escaped from her pen.

He said some helpers were working on feeding the animals in the pen when “the next thing you know she is standing in the road. They tried to lure her back into the pen with food, but she ran off.”

Bagley said he has had emus slip out of open gates during feeding time before, but he has always been able to lure them back in with their feed.

Once Harriot had escaped, Bagley called his neighbors and put out the word on social media that an emu had run away from the farm.

He enlisted the help of neighbor Tim Jones in his efforts to bring Harriot back home safe.

“(Mark) let me know the day she got out,” Jones said. “We have been at it since day one trying to get her home.”

Bagley used social media to update followers on the situation. There were multiple sightings of Harriot throughout the ordeal.

The emu got into a horse pasture on County Road 55. Bagley and others set up a catch pen, but Harriot jumped a 6-foot high barbed wire fence and once again escaped.

She had been sighted in the parking lot at Gap of the Mountain Fire Department about six miles away before being discovered in the pasture.

Emus can reach about 6 feet in height and run 35 mph.

While Bagley was concerned for the well-being of Harriot, he was also concerned for her mate back at the animal farm tending to a nest full of eggs.

He said they had 10 eggs that take about eight weeks to hatch. The father emu builds a nest, the mother lays the eggs and then does other things while the father sits on them.

Once the eggs hatch, the father leaves to finally get much-needed food while the mother takes over care of the offspring.

Bagley said he was worried the father emu would leave the chicks alone if the eggs hatched before Harriot was returned. The chicks would have to be tended to by he and his volunteers if the mother was not returned in time.

Jones received word that Harriot had once again found her way into the pasture on County Road 55 on Feb. 21.

The owner told him her horses were scared of the emu.

Emus are native to Australia, and those horses were unlikely to be familiar with such an animal.

Jones went into the pasture to attempt to corral Harriot. He managed to lasso her leg with a rope. Once he had a hold on the bird, he placed a sock over Harriot’s head to calm her down, a technique he knew works on emus.

“I have been carrying a sock around with me in my truck this whole time just in case I needed it,” he said.

Once he had Harriot pacified, Jones called his brother and son and had them bring him a cow trailer to use to take the big bird home.

Bagley said Jones was the real hero of the ordeal.

“A scared emu is very dangerous,” Bagley said. “I don’t think there’s enough food this time of year. They feed on things like seed and bugs and grubs similar to chickens, and there’s not a lot of that stuff out right now.”

Jones, who is used to being around the birds, said he never thought about the emu being dangerous when he made the attempt to catch her by himself.

“I have helped (Mark) with all kinds of animals,” he said. “I was more worried about getting (Harriot) home safe.”

Once Harriot was home, Bagley said everyone “breathed a sigh of relief.”

Though she had lost a lot of weight, Bagley said Harriot was eating, doing well and should be fine after her nearly two-week escape.

“Thanks to the community and everyone on Facebook who posted about the sightings all over the place,” he said.

No ‘major issues’ by rain expected for Coosa River

By J.R TIDWELL / Editor The state of Alabama has seen periods of heavy rain over the last few days.... read more