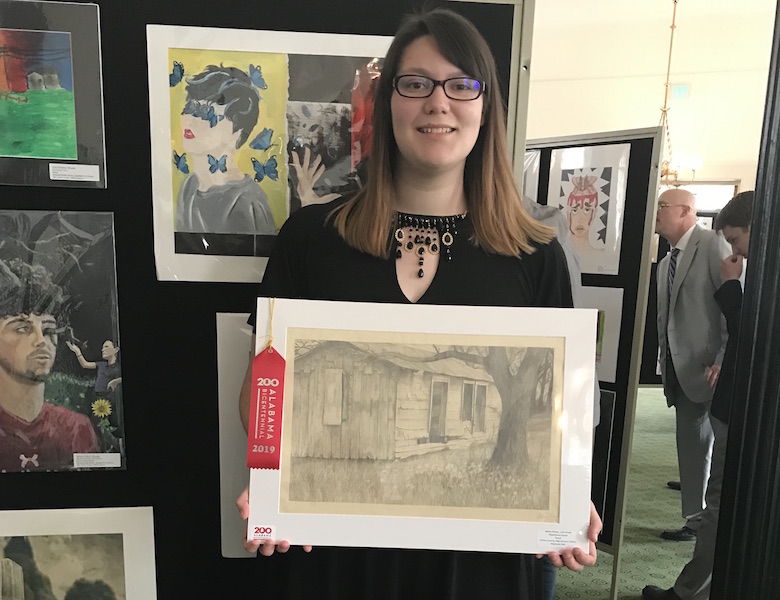 Chilton County High School’s Abbey Moses was honored at a recent Alabama Bicentennial reception for one of the top four works of art by secondary students in this year’s art show.

Winners had been notified at the end of January.

Moses said she was “surprised.”

“I didn’t think I would win,” Moses said.

The show does not have a specific first through fourth place, so Moses does not know her specific ranking, except that it is in the top four.

Moses received a plaque of recognition as well as one for the school to display.

Moses said “it was cool” to see her work on display.

“They had a lot of other artists’ pictures up there, so it was fun getting to see everybody’s art style,” Moses said.

Art teacher Hollie Halford selected Moses’ a drawing of an abandoned building, which she had completed last semester to submit for the show.

“It was actually for the (Chilton County) Sesquicentennial that we had last semester,” Halford said. “For Abbey’s class, I had them draw an old abandoned house in Chilton County. It just so happened that that fit the subject for the Bicentennial.”

During her visit to Montgomery to attend the reception and see the art show, Moses also attended a meeting of the Alabama State Board of Education where she was recognized with the other art show winners.

Moses became interested in art because of her father and brother, both of whom took lessons with Scarlett Teel. When she was younger, Moses also studied art with Teel.

“She’s the one who got me where I am now,” Moses said.

The Alabama Bicentennial art show will be on display at the state capitol through March 14.

Defensive player of the year signs with Huntingdon