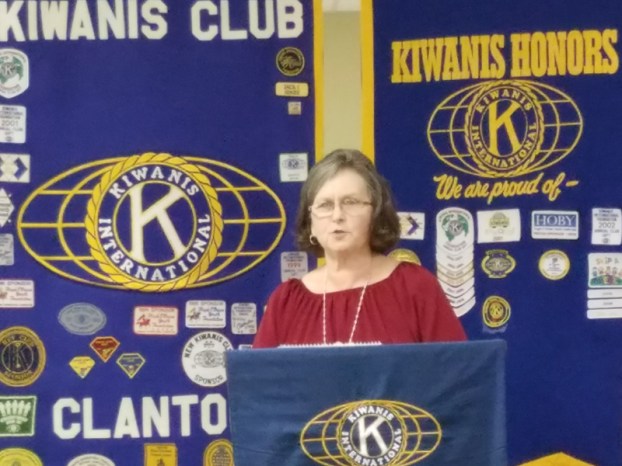 Sheri McKee talked about Blast from the Past as a guest speaker at the Clanton Kiwanis Club’s Feb. 21 meeting. (Photo by Anthony Richards)

Kiwanis Club learns about Blast from the Past

Blast from the Past coordinators Rick and Sheri McKee were the guest speakers at the Clanton Kiwanis Club’s meeting on Feb. 21.

The show is a musical review that will consist of 24 songs performed over two hours.

According to Sheri McKee, the production of getting on and off stage from song to song is quite the feat.

The show has grown and developed a following since it started 27 years ago.

Twenty-seven Chilton County High School students participated in the inaugural event. That number has increased to 127 performers this year.

Students have been practicing their routines roughly twice a week since January.

The profits from the event are used to upgrade and improve the CCHS auditorium.

Some of the upgrades include the auditorium’s seats and the replacement of the stage curtain three times.

According to Sheri McKee, the building is so well built that she can be working the soundboard at the back of the auditorium and is still able to understand someone asking her a question from the stage without the aid of a microphone.

Auditoriums built with acoustics in mind are designed so that sound is amplified from the stage and not the crowd.

Vice versa, she has to shout to get a message across from the back of the room to the stage.

They are currently raising money with the hopes of eventually upgrading the sound system.

Twenty adults, 15 of which are past performers, are volunteering to help make this year’s production of Blast from the Past run as smoothly as possible.

Between the dress rehearsals and performing in front of Clanton Elementary School students, the cast will put on nine shows throughout a week.

The performances that are open to the public are scheduled for March 1 at 7 p.m., March 2 at 7 p.m. and cap off with a Sunday matinee at 2 p.m.