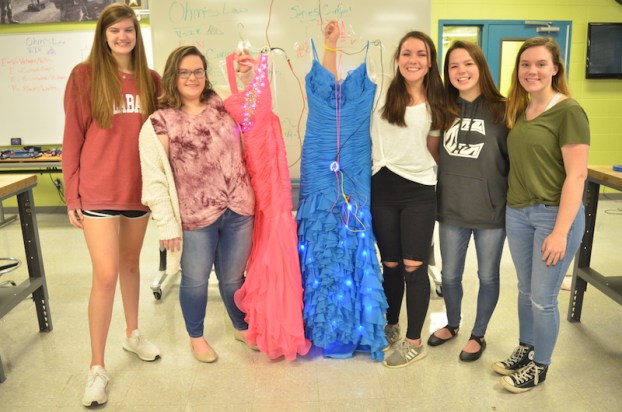 The Chiton County Schools Girls Engaged in Math and Science team is headed to Southern Research’s Birmingham location on Feb. 22 to showcase their wearable technology dresses at the GEMS Expo.

Opportunities to appear at the Expo are competitive. The team made it through a multi-tiered application process before being selected.

“There are hundreds of teams around the state that apply,” team sponsor Jay LeCroy said.

LeCroy said only about 20 of these are selected to present.

Students have been working on programming a series of lights and adding them to prom dresses for their project.

Team member Grace Tuell said the circuit board the lights connect to has been programmed with six sequences triggered by movement or pressing a button in the dress.

The wires for the lights will be connected to a battery pack hidden inside the dress. Team member Emily Powell said she worked on the programming and soldering.

“I thought it was really cool to be able to work on something like this,” Powell said. “It was interesting.”

The project has also given her experience in engineering, which is the field she wants to go into. Powell said she was uncertain which area of engineering she wanted to pursue, but it will likely be electrical engineering.

Sewing the lights into the dress proved to be a bit of a challenge. Conductive thread needed to be used to sew the lights onto the dress. However, Tuell said the thread would only carry the power current for a short distance. Wire had to be used to connect the groups of lights in the skirt of the dress in order to keep the level of power needed. Old telephone wires were dissected to use for the dress.

“Using lights going into a dress was just an example of how this will play into the role of medicine in the future because doing something like this proves that we can add sensors to clothes to help patients who are anemic or have diabetes,” team member Alex Audie said. “Whenever they are starting to have symptoms, it can be recognized early onIy can be used as prevention.”

A sensor for a patient’s blood sugar level could be connected to lights within their clothing to notify them and those around them that they are about to have a problem.

The project is also Bluetooth enabled, so color sequences can be changed using a cellphone.

In addition to showcasing their project to science and engineering professionals at the Expo, teams will also be meeting engineers and completing projects.

“It is a great networking opportunity for our girls,” LeCroy said.

The dresses for the project were donated by Brenda’s Formal Wear.

The team worked on the project at the LeCroy Career Technical Center.

The 2019 baseball season got underway with a President’s Day game hosted by Maplesville against nearby foe Dallas County. Despite... read more