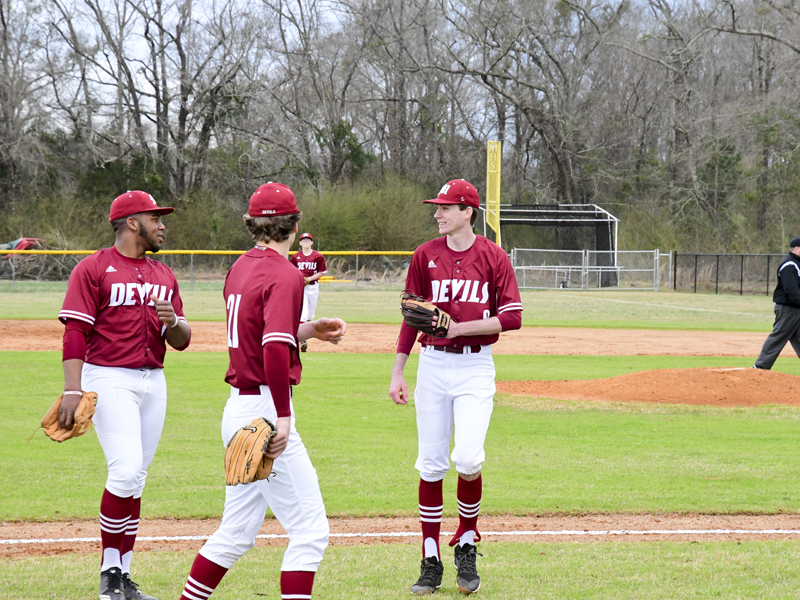 The Maplesville Red Devils opened up the 2019 baseball season against Dallas County on Feb. 18. MHS lost 9-6 in extra innings. (Photo by Anthony Richards)

The 2019 baseball season got underway with a President’s Day game hosted by Maplesville against nearby foe Dallas County.

Despite losing 9-6 in eight innings, there was a sense of excitement embarking on another season for both the players and first-year head coach Justin Little.

“It shows promise for the future and the future of this season,” Little said. “We’re getting there, and I see a lot of good things out of these guys.”

The Red Devils (0-1) trailed 5-4 heading into the bottom of the seventh inning, but Gavin Jones stroked a two-out RBI double into the gap that scored William Mims and forced extra innings.

It had been a quiet game for the Maplesville bats until Jones’ clutch hit.

“I thought they did a good job of fighting back,” Little said. “I wish we would have gotten the bats rolling a little bit sooner. It’s one of those things, where if we started [hitting] a little earlier we may not have had to have been in that [late game] situation.”

Dallas County answered by scoring four runs in the top of the eighth inning, and Maplesville was only able to get one of those runs back following a Jackson Abbott RBI double to center field in the bottom half. 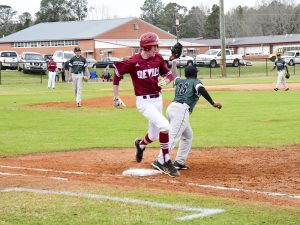 Jackson Abbott attempts to beat out a ground ball. (Photo by Anthony Richards)

Abbott believes that the hitting will improve as the season moves along and players get more repetitions at the plate.

“Most of the guys have been playing basketball, so we haven’t seen that much live pitching yet,” Abbott said. “It was the bottom of our lineup that really got us started.”

Four pitchers took the mound for the Red Devils with Christin Brown getting the start while Abbott, Brody Hubbert and Mims provided relief.

“It felt good,” Abbott said. “I’m still trying to work on hitting my spots, but I know that early in the season I’m probably not going to hit them consistently like I want to.”

According to Little, the way the pitching played out was steady with the plan heading into the game.

“I don’t want them throwing too many pitches this early in the season, because I’ve got guys that were just dribbling a basketball a couple of weeks ago,” Little said. “Early on in the season it’s about figuring out what works. Once we getting going, I think we’ll be alright, because this is a good group of kids and they like to work.”

Maplesville led 4-2 after the first inning, as Dallas County hit back-to-back batters with the bases loaded to help the cause.

Little was an assistant coach with the football team in the fall, which he believes has helped him build existing relationships that should transfer to the baseball field.

According to Abbott, Little has a very intense and passionate coaching style, which he appreciates as a player.

With the predicted weather forecasts calling for rain throughout the week, Little felt fortunate that his team was able to get at least one game under their belt during the opening week.