Heavy rains could cause flooding issues 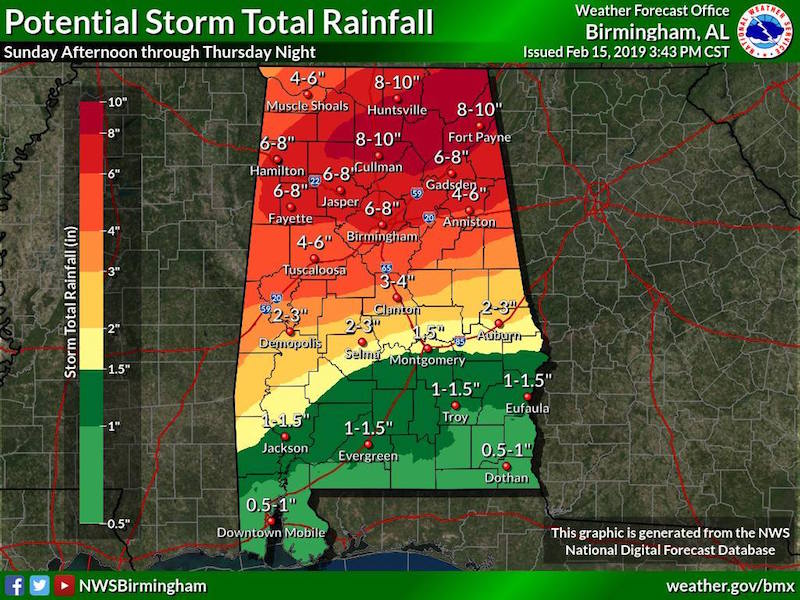 Parts of central Alabama could see 3-6 inches of rain this week, according to the National Weather Service. (NATIONAL WEATHER SERVICE)

The state of Alabama could experience periods of heavy rain across multiple days this week, according to the National Weather Service.

Central Alabama is expected to receive between 3-6 inches of rain between Tuesday and Thursday, though more rain may fall through Sunday, according to the latest forecast.

Northern Alabama is expected to receive even more rain, so that area has a higher chance of flooding. However, some issues may be seen locally as well.

“A moist southwesterly flow of air aloft with periodic embedded weather impulses will combine with a stalled frontal boundary to produce several rounds of moderate to heavy rainfall across the area this week,” said the NWS. “At this time, cumulative rainfall totals of three to six inches with localized higher amounts are expected across much [of] Central Alabama by mid week.”

One of the largest areas of concern during the event will be potential river flooding.

“With current stream flows near to above normal and moist soil conditions across the area, many rivers and streams will experience rises from this rainfall,” said the NWS. “At this time, it appears that at least minor to moderate river flooding is likely to develop by midweek and persist into the weekend on some area rivers. The rivers that are most likely to experience flooding later this week include the Tombigbee, Black Warrior, Sucarnoochee and Cahaba rivers. Depending on where and how much rainfall occurs, other river basins in Central Alabama could also be affected by flooding later this week.”

Flash flooding due to prolonged rain may also become an issue throughout the week.

“Interests across Central Alabama are urged to monitor the latest forecasts and weather developments, and be prepared to take protective actions if flooding develops,” said the NWS.

The NWS has a national campaign that reminds people “when flooded turn around don’t drown.”