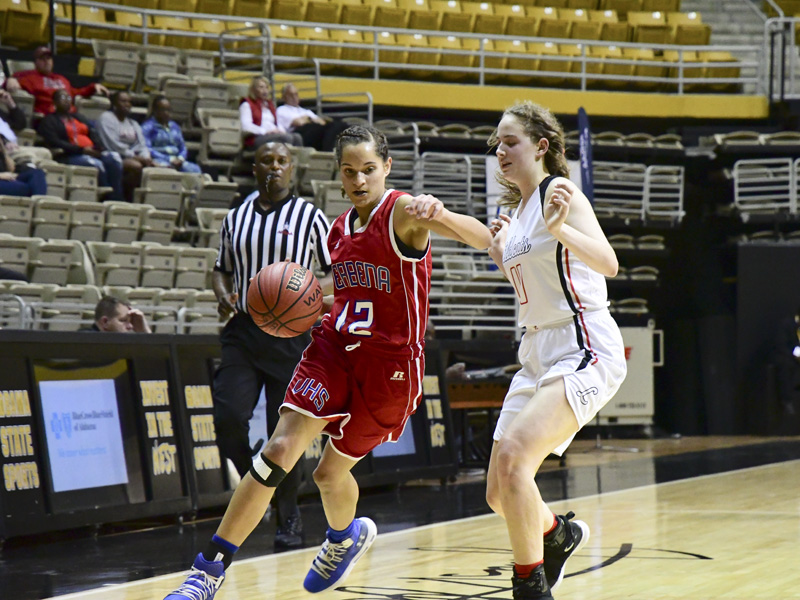 Verbena’s JaNiya White handles the ball against a St. Luke’s Episcopal defender during the Class 1A regional semifinals in Montgomery on Feb. 14. (Photo by Anthony Richards)

The historic run for the Verbena girls basketball team came to an end following a 67-44 loss to St. Luke’s Episcopal in the Class 1A regional semifinals on Feb. 14.

“We knew coming down here that the only way the season ended was if we lost or won,” Verbena head coach David Sneed said. “At the beginning of the year I said ‘lets get to Montgomery.’ We lost, but here we are.”

Fortunately for the Red Devils, losing is not a feeling that they have had to endure too often this season. Verbena capped off the memorable season with a record of 17-4.

A contingent of Verbena fans made the trip down to the Dunn-Oliver Acadome in Montgomery to watch the Red Devils play on the big stage.

However, playing under the bright lights and in a building with vastly different sight lines for shooters, due to the increased number of seats and the vaulted ceiling, was something that took some time for Verbena to adjust to. 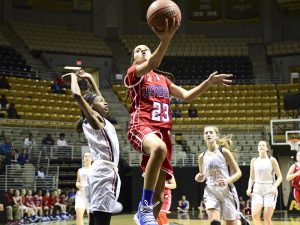 Jasmyn White drives to the basket. (Photo by Anthony Richards)

As a result, the Red Devils seemed to be a little off in their decision-making and made mistakes, such as getting a 10-second violation in the backcourt and missing passes to open teammates, that had not been a problem all year.

“I was chomping at the bit for the other team to press, because I thought our ball-handlers could really get out and run on it,” Sneed said. “We just didn’t make any layups for the first quarter.”

According to Sneed, there was a point early on when the Red Devils missed about 10 close-range shots in a row.

“You combine that with the missed free throws and silly turnovers, and you just can’t win when you do that,” Sneed said.

Despite battling inconsistency, Verbena continued to string together spurts of offensive success throughout the game and cut the deficit from 20-plus points to 14 points with 2:23 left in the game.

Sneed called a timeout with 6.5 seconds remaining and sent substitutions in for JaNiya White and fellow senior Hailey Kirkland, who received a standing ovation from the Verbena faithful as they walked off the court for the last time in their high school careers.

According to McDaniel, there were nerves and anxiousness entering the game, but once it started the focus shifted from the atmosphere to the happenings on the court.

“We all worked together as a team [all season],” McDaniel said. “I love it when a team makes you feel like family.”