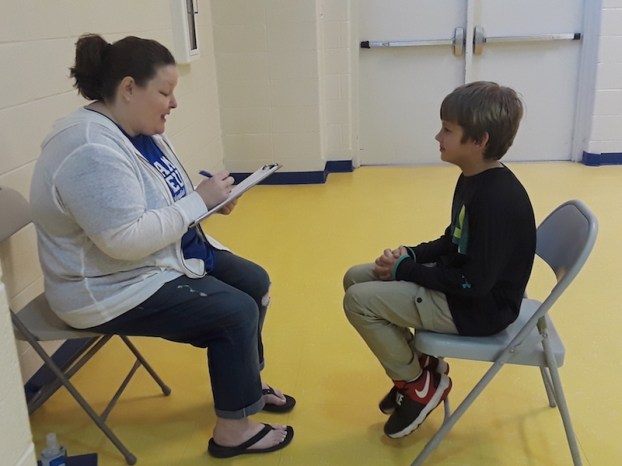 Clanton Intermediate School fifth-grade students are getting a jump on developing good interview skills thanks to The Amazing Shake interview competition.

CIS Principal Louise Pitts said the event is similar to one hosted at the Ron Clark Academy, the same school that inspired the CIS house system.

“It is preparing students for their future when they are trying to interview for scholarships, interview for jobs,” Pitts said. “They are learning those skills of firm handshakes, eye contact and being able to carry on a conversation.”

Pitts said she hopes to hold the event on an annual basis and include the fourth- and third- grade students next year.

“They have to meet with six judges, and they have one minute with each judge,” Pitts said.

Throughout the interview, judges are looking for a firm handshake, eye contact, ease of conversation and being able to think of good answers in a timely manner.

Students will also be judged on how well they introduce themselves and confidence level in expressing themselves.

Each judge had a different topic that they are asking students about. Topics included what they wanted to be when they grew up, describing themselves, their favorite school subject, what they like to do outside of school and their thoughts on the house system.

A group of the higher scoring students will go on to the next round.

To help prepare students the week before the event, Pitts and Assistant Principal Roger Sheffield shook hands with each fifth-grade student and gave them feedback on their handshake.

“You may be the brightest person in the room, but if you appear to be the weakest from your mannerisms … you are not going to get the job, even though you might be the best employee,” Pitts said.

Students also watched a portion of a video about the Ron Clark Academy competition.

For round two, Pitts will ask people outside the school to serve as judges to increase the challenge. The time a student spends with each judge may also be increased. A third round would have community leaders serving as judges. The top scorer in this round will be declared the school winner.

Pitts said this is the first time the school has done anything like this. However, she hopes to be able to send students to the Ron Clark Academy National Amazing Shake competition at some point in the future.

The debut of soccer at Chilton County High School led to a memorable night full of scoring. The Tigers won... read more