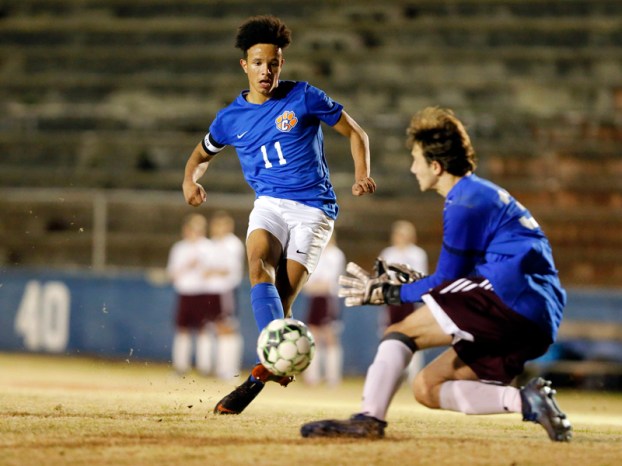 Tyrell Price of CCHS kicks it past the Thomasville keeper for one of his nine goals in the game. (Photo by Brandon Sumrall/Special)

The debut of soccer at Chilton County High School led to a memorable night full of scoring.

The Tigers won their season opener by defeating Thomasville 13-3, which included nine goals for Tyrell Price.

“I couldn’t get any sleep last night because of the unkown,” CCHS head coach Victor Rodriguez. “To find out how much talent we’ve got is overwhelming.”

CCHS got off to a fast start and built a 6-1-halftime lead, as it quickly turned the unknown into a reality.

Price scored five of the six first half goals and found consistent success slicing through the Thomasville backline.

“The way we scored, they [Thomasville] never got a rest,” Rodriguez said. “We had them on their toes.”

His first goal was the result of a combination of nifty moves in the open field as he moved up the right side before burying a shot in the back of the net.

Several of his other goals were the result of Price getting past the defense and creating one-on-one opportunities with the opposing goalkeeper.

“We work on moving the ball and trying to get open,” Rodriguez said.

Even when Price was not scoring the goals, he still found ways to be a major contributor.

On the Tigers’ second goal of the night, Lennard Althaus hit a shot that tucked in the upper right corner of the goal. The opportunity was set up by a free kick from Price. 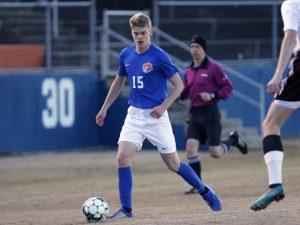 C.J. Hunter proved to be comfortable with the ball at his feet. (Photo by Brandon Sumrall/Special)

One of Rodriguez’s main messages to his players has been that performing in the classroom is how you get the opportunity to perform on the field.

An example of that is freshman Austin Cooedy, who is a straight-A student and is making the most of his playing time.

“We have some fast people on our team, so we knew that we had the capability [to score],” Cooedy said.

Cooedy is one of several players that played soccer growing up but have not played it competitively in recent years.

According to Cooedy, his confidence is quickly coming back and he looks for it to continue to escalate as the season progresses.

Senior Devin Horner started in goal for CCHS and made some nice saves while allowing three goals.

According to Rodriguez, the main thing to remember as a goalkeeper is to see the ball and not lose track of it.

Fellow senior C.J. Hunter also spent some time in net late in the game, as the Tigers look to experiment with the lineups in the early part of the season.

“I’m happy that everybody got to play,” Rodriguez said.

Hunter also played on the attacking line and looked comfortable playing alongside Althaus and Price.

“We were just looking to stay focused the entire game,” Hunter said. “Once we started playing and getting into the mindset, we started really coming together. We’re just trying to get better every day and hopefully continue to win.”

The Verbena girls basketball program took a giant leap forward after defeating Isabella 47-25 in the Class 1A sub-regionals on... read more