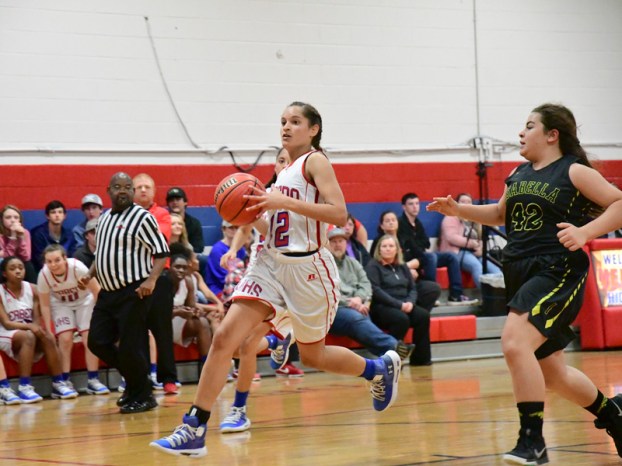 JaNiya White drives to the basket en route to an old-fashioned 3-point play against Isabella in the sub-regionals on Feb. 11. She finished with a game-high 19 points. (Photo by Anthony Richards)

The Verbena girls basketball program took a giant leap forward after defeating Isabella 47-25 in the Class 1A sub-regionals on Feb. 11.

“This is huge, and we’re enjoying this run,” Verbena head coach David Sneed said. “We really did what we normally try to do, which is to get out in transition.”

With the victory, the Red Devils advance to the regional semifinals where they will play St. Luke’s Episcopal at the Dunn-Oliver Acadome in Montgomery beginning at 3 p.m. on Feb. 14.

The win marked the first time that the VHS girls basketball team has made it past the sub-regional portion of the bracket.

“It’s been a pretty good senior year so far,” Verbena senior Hailey Kirkland said. “It feels great that people will always be able to look back and see that we were the ones that did this for the first time in forever. We don’t know what to expect, so we’re just going to play our hardest.”

It was a tight contest early, as Verbena slowly opened up a 13-9 lead at the end of the first quarter and 22-13 at halftime.

However, senior JaNiya White began the third quarter on a mission to drive to the basket and was not to be denied.

“I thought we were getting bumped around a good bit to start the game, and we left a lot of points out on the floor because of that,” Sneed said. “They really called it a lot tighter [in second half], which led to opportunities.” 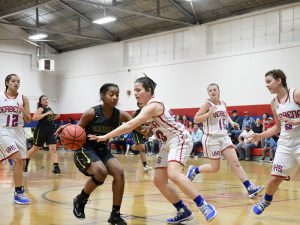 She started the second half with back-to-back old-fashioned 3-point plays that quickly extended the Verbena lead to double digits.

“When she hit that first layup in the second half and then hit the free throw, I knew the way the game was going to go, because she caught fire,” Sneed said.

Isabella was stuck at 13 points for the first five minutes of the second half before the Mustangs eventually re-established their groove and scored seven points in the final three minutes of the third quarter.

Madison Kelley fouled out with 5:10 remaining in the fourth quarter, but Kirkland took over in the post and scored a couple of big baskets down the stretch.

According to Sneed, the fact that five other players contributed to the stat sheet to go along with the production from the White sisters is scoring depth he has been striving for all year.

The Red Devils went on to outscore the Mustangs 25-12 in the second half en route to the convincing win.

A strong contingent of Verbena and Isabella fans were in attendance, which helped add to the big game atmosphere.

“I was excited about the number of fans that were in the building,” Sneed said. The fan support and community coming out was really a big deal for us.”

By BRANDON SUMRALL | Special to the Advertiser Football returned to Chilton County on the night of Feb. 9 as... read more