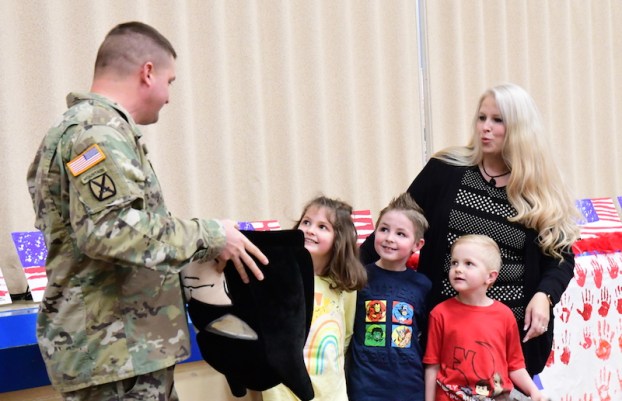 U.S. Army Sgt. John Phillips surprises his children Logan, Jadenn and Landenn. Mom Dennita Philips, far right, acts surprised even though she was in on the planning.

Many of the students at Clanton Elementary thought they were simply attending another President’s Day assembly.

What they did not know is they were about to witness the joyful reunion of U.S. Army Sgt. John Phillips with his family.

Phillips’ three children attend CES and had no idea he was going to be there.

After opening the assembly with the pledge of allegiance, students played a game guessing the masked dancer. The first two dancers turned out to be school employees, but the final dancer was Sgt. Phillips.

He came out wearing a Batman mask and his U.S. Army uniform.

Students Logan, Jadenn and Landenn Phillips were joined by their mom Dennita at the front of the room to guess who the dancer was. Both older children, Logan and Jadenn, knew it had to be their dad.

As the mask came off, the smiles grew wide and the room erupted in cheers.

Landenn, the youngest, held a sign that read “Outta my way I get my daddy back today” that his teacher had made, but since he cannot read yet, it did not spoil the surprise.

It had been a year since the Phillips family had been together.

Sgt. Phillips had been deployed to Qatar and has been stationed at Fort Riley for the past six months.

Dennita said none of the children knew their father would be coming home that day.

Sgt. Phillips has served in the U.S. Army for nearly 12 years.

He has previously been deployed to Iran, Kuwait and The Netherlands.

Even while Sgt. Phillips was deployed, the family stayed in contact.

“(We) talk a lot on the phone,” Dennita Phillips said. “We send packages as a family to him, like care packages.”

They also use video calling to see each other.

The assembly closed with the second-grade students singing about thanking veterans for freedom.