The Thorsby Rebels were the lone boys team in the county school to make the AHSAA sub-regionals after finishing runner-up in Area 8-2A.

Thorsby defeated Reeltown 54-40 in the area semifinals on Feb. 5 to secure a spot in the next round, but will have to travel after losing to Central Coosa 69-52 in the area championship on Feb. 7.

It was the third victory of the season against Reeltown and the third loss to Central Coosa.

As a result, the Rebels will matchup against Abbeville on Feb. 12 at 7 p.m.

Christian Fortner and Sawyer Sellers were named to the all-tournament team after being Thorsby’s top two scorers in both contests. 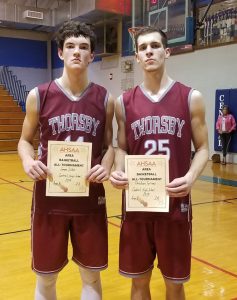 Sawyer Sellers and Christian Fortner were named to the all-tournament team. (Contributed photo)

Fortner averaged a double-double in the area tournament, while Sellers just missed out on matching the feat.

Together they combined for 50 points and grabbed 41 rebounds in the two games.

John Ryan Wood, Cole Farris and Tyler Jackson also contributed to the offense in key ways in both games.

Farris was on target from long range and connected on four of six 3-point attempts during the tournament.

Wood’s defensive skills were continually on display, as he led Thorsby with three steals against Reeltown and Central Coosa.

Tyler Jackson is the definition of a student-athlete, as he continues to excel in both academic and athletic disciplines. Jackson... read more