Football returned to Chilton County on the night of Feb. 9 as former Billingsley Bears, Maplesville Red Devils, Chilton County Tigers, Thorsby Rebels, Verbena Red Devils, Jemison Panthers and players from other schools across the area came together under one banner, that of the Chilton Tigers of the Amateur to Professional Developmental Football League.

After weeks of practice and preparation, the Chilton Tigers took to the gridiron in preseason action to take on the Alabama Tigers of Elba. Chilton would win go on to win 15-6.

Both teams would struggle to find much offensive success during the first quarter, as each team’s defense would lead the way through the early going.

The first scoring opportunity of the game would come after a pair of long first down runs by Christian Briscoe and Jaryus Wilson that would move Chilton down inside the Alabama red zone.

However, a 30-yard field goal attempt by Chris Hunter would sail just left of the uprights to keep the game scoreless early in the second quarter.

A pair of scoreless possessions by both teams would precede the first turnover of the game.

On a third and 7 at their own 38-yard line, quarterback Dacoda McConnell dropped back to pass and was intercepted by Chilton’s Briscoe, who returned the ball to the Alabama 34.

One play later and Wilson would connect with former Billinglsey Bear J.T. Steele for a 34-yard touchdown reception. With Hunter adding the PAT, Chilton took a 7-0 lead to the halftime break. 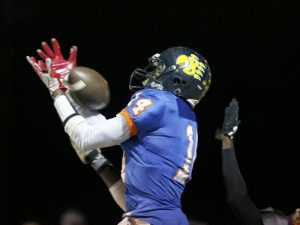 A scoreless possession by Chilton to start the second half would turn the ball over to Alabama after a missed 31-yard field goal attempt and would set the visiting Tigers up first and 10 at their own 31.

A first down completion from McConnell to Jabari Brown and a 30-yard completion by McConnell would move Alabama out across midfield. Six plays later, and Alabama would find pay dirt on a 7-yard touchdown run by Christopher Griffin.

The 2-point attempt would be snuffed out by former Chilton County and Auburn Tiger Derrick Lykes and would keep Chilton out in front by one midway through the third.

A pair of turnovers by Chilton would force the home standing Tigers defense to stand tall, and stand tall they would, forcing a pair of three and outs that would keep the turnovers from damaging their cause.

With their defense keeping them ahead by one, the Chilton offense would put together another scoring drive thanks to a pass completion from Wilson to Danzel Waters that would move Chilton out to the 33 where Wilson would break lose on a scramble for a 33-yard touchdown carry to make it a 13-6 Chilton lead.

Chilton would use a little trickery on the ensuing kickoff with an onside kick that was recovered That set the Tigers up first and 10 near midfield.

Chilton would use the drive to move as far as the Alabama red-zone before stalling after a fourth and goal at the 2 would be stuffed and turned over to Alabama.

The poor field position by Alabama would be enough to work in the favor of Chilton, as a second and 10 at their own 1-yard line would be stuffed by the Chilton defense for a safety that would move the score to its final of 15-6.

Wilson led the Chilton rushing attack with 125 yards on 13 carries with one touchdown while completing seven passes on 18 attempts for 99 yards and a one touchdown.

History was made by the Verbena Red Devils following a 54-46 girls basketball victory over Autaugaville in the Area 5-1A... read more