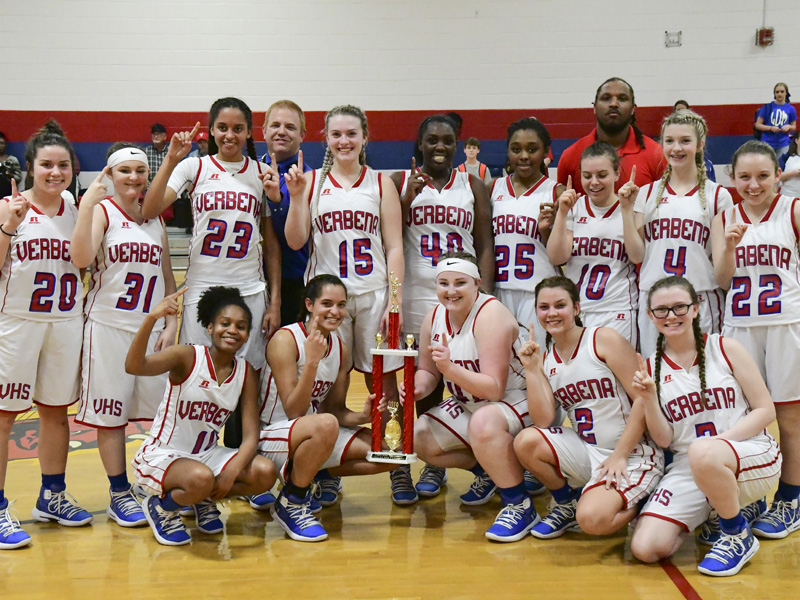 History was made by the Verbena Red Devils following a 54-46 girls basketball victory over Autaugaville in the Area 5-1A championship on Feb. 7.

It was the first time the school had won an area title in girls basketball, and they did so in front of their home crowd.

“It’s definitely something that I’m going to brag about for a while,” Verbena sophomore Natalie Easterling said. “We want to aim for the highest as a team.”

Sixteen of her points came in the second half, which proved crucial as the Red Devils staved off a comeback attempt by Autaugaville. Jasmyn White added 19 points.

However, AHS turned up the pressure in the final quarter and were able to cut the deficit to 3 points in the first couple of minutes. 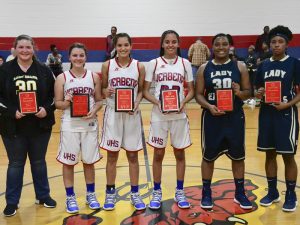 However, the Red Devils were able to reorganize themselves and never lost the lead.

Instead, Verbena went on a scoring run of its own, and eventually stretched the lead back to double digits.

“We haven’t really had trouble with the press all year,” head coach David Sneed said. “We made some sloppy turnovers, but were still able to play hard down the stretch.”

Easterling hit some timely baskets in the championship game and was named to the all-area team along with JaNiya and Jasmyn White.

“It’s a huge accomplishment, and it only makes we want to push even harder,” Easterling said. “It’s been an amazing ride this year.”

Isabella McDaniel played tight defense against Autaugaville’s best ball-handler and forced her to work hard just to get the ball past midcourt.

According to Sneed, winning the area is an important step in accomplishing the team’s preseason goal of making it to the regional competition in Montgomery.

As area champion, the Red Devils will host the Isabella Mustangs, runner-up in Area 7-1A, in the sub-regionals on Feb. 11. A specific time for the game was not posted on the AHSAA website.

It will be the third matchup against Isabella this season for Verbena. The Red Devils won the prior two meetings by an average of 6.5 points per game.

Sneed expects coach Jared Day and Isabella to attempt to isolate JaNiya and Jasmyn White, which means that other girls have to continue to step up as scorers.

“Win or lose at this point is like playing with house money, because Verbena has never been here [hosting a sub-regional],” Sneed said. “Everything after this is something new for us.”