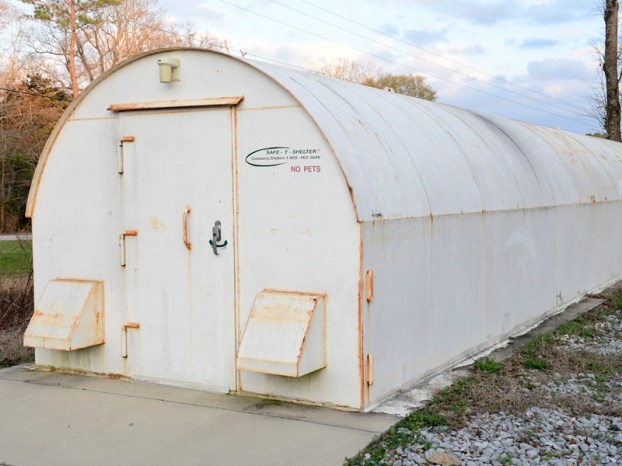 The Verbena storm shelter has experienced problems with mold on the inside due to water gradually leaking in through the doorway during torrential rains. (Photo by Anthony Richards)

Some of the recently built storm shelters have run into questions regarding the cosmetic quality of the buildings.

According to EMA director Derrick Wright, the storm shelters appear structurally secure and would be able to hold up in the event of a tornado.

However, certain shelters have experienced paint chipping on the exterior coating, which has led the Commission to hold off on completely signing off on the shelters until the quality of the project meets the desired specifications.

The Commission is currently withholding the final 10 percent of the payment until the previous requests are met and the quality of the shelter matches the initial agreement.

“We want our citizens to be safe, but we don’t want to turn over junk,” Commissioner Steve Langston said.

If the county signs off on the project, they would be acknowledging that they are satisfied with the end result.

“We’re being pretty picky, but also looking long term,” Wright said. “We don’t want to be painting the shelters every so many years.”

Another initial request that was not met during the construction of the shelters was that the desired locks were not installed.

Certain shelters were built with a different type of lock than the county had agreed upon. Despite the variation in style, the locks work properly and serve their purpose.

According to Wright, some of the shelters, such as the Verbena shelter, have also had problems with mold on the inside due to water gradually leaking in through the doorway during torrential rains.

The most recent storm shelter grants were bid out in 2011.

According to Wright, the company also built the Maplesville storm shelter in 2005, which does not have a history of problems.